India has no opinion on the Jan 5 general election in Bangladesh which the Awami League won amid criticism by the West, External Affairs Minister Sushma Swaraj has said 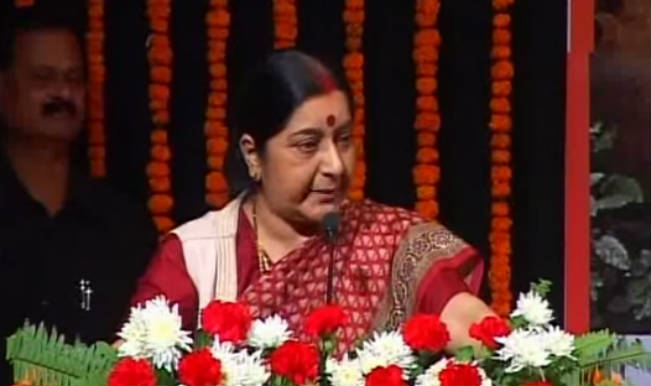 Dhaka, Jun 29: India has no opinion on the Jan 5 general election in Bangladesh which the Awami League won amid criticism by the West, External Affairs Minister Sushma Swaraj has said. Also Read - Vaccine, Jobs And Unemployment Allowance: High Political Drama in Bihar as Parties Wage Manifesto War Ahead of Polls

“We cannot give any opinion on the election. Only people of Bangladesh can decide their political future,” the minister told Bengali daily Prothom Alo in an interview published Sunday. Also Read - Article 370 Won't be Restored, Says BJP; Accuses Mufti of Disrespecting Indian Flag

“Our policy towards Bangladesh is future-driven. We frame policies considering issues those are important for India-Bangladesh ties,” she said. The BJP leader, whose three-day visit to Dhaka ended Friday, was asked if her government supported the “controversial” election.

Western countries have criticized the polls that were boycotted by the main opposition Bangladesh Nationalist Party. The Awami League of Prime Minister Sheikh Hasina won a landslide in the election.

On a question that the ruling Awami League enjoyed “special relations” with India’s Congress party, she said: “It’s your notion. Our government will continue to improve ties with Bangladesh.

“Relations between the two countries depend on people-to-people and government-to-government contacts. “We wish to establish an inclusive partnership with Bangladesh and we want to do it by taking every section of (the Bangladeshi) society into confidence.”