Jayalalithaa recalled that based on the prompt and positive response to her earlier letters to Modi, through the effective intervention of the Centre, 53 fishermen were released. 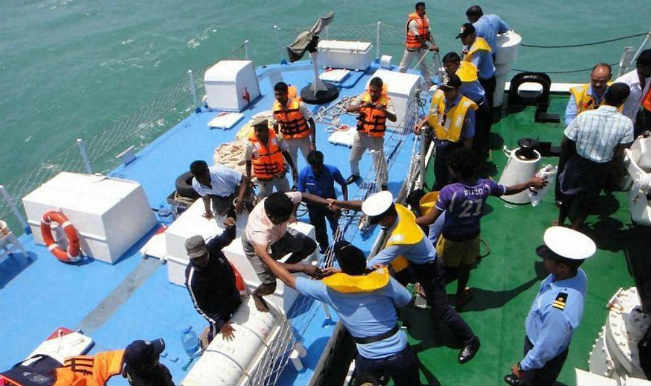 Chennai, Jun 30: Seeking strong diplomatic action from the Centre for release of 28 Indian fishermen arrested by Sri Lankan Navy, Tamil Nadu Chief Minister J Jayalalithaa today said the Centre should “not” treat the IMBL with the island nation as a settled question, as it is a subject matter of litigation in the Supreme Court. Also Read - 'Great Leader And Loyal Friend', Trump's Birthday Wish For PM Modi

Referring to the latest apprehension of Indian fishermen by Lankan Navy, Jayalalithaa in her letter to Prime Minister Narendra Modi said, “These continued and repeated instances of apprehension and abduction of our fishermen by the Sri Lankan Navy are adding to the very heightened sense of unrest and resentment among the Tamil Nadu fishermen”. Also Read - Happy Birthday Narendra Modi: Kangana Ranaut Prays For Prime Minister’s Long Life in a Video

“I would like to reiterate that the Government of India should not treat the International Maritime Boundary Line (IMBL) with Sri Lanka as a settled question as the very ownership of Katchatheevu islet and the unconstitutionality of the 1974 and 1976 agreements by which the islet was ceded to Sri Lanka are the subject matter of litigation in the Supreme Court of India”, she said.

“Traditional livelihood” of the fishermen should not be allowed to be “disrupted” by the hostile actions of Sri Lankan Navy, she said. “My government looks to your immediate and emphatic response to this issue and to ensure that it is taken up at the highest levels of the Sri Lankan Government, so that our fishermen are not repeatedly arrested and abducted in the high seas of the Palk Bay”, she said.

Jayalalithaa recalled that based on the prompt and positive response to her earlier letters to Modi, through the effective intervention of the Centre, 53 fishermen were released. However, she said that Sri Lankan Navy has apprehended 17 fishermen and three mechanised boats from Rameshwaram fishing base on June 28 while 11 more apprehended fishermen were yet to be released by Sri Lanka.

“I request you to kindly ensure an early and strong diplomatic action to secure the immediate release of all the 28 Indian fishermen along with their fishing boats, she said.