The Andhra Pradesh Reorganisation bill was introduced in the Lok Sabha last Thursday amid ruckus and violent protests. 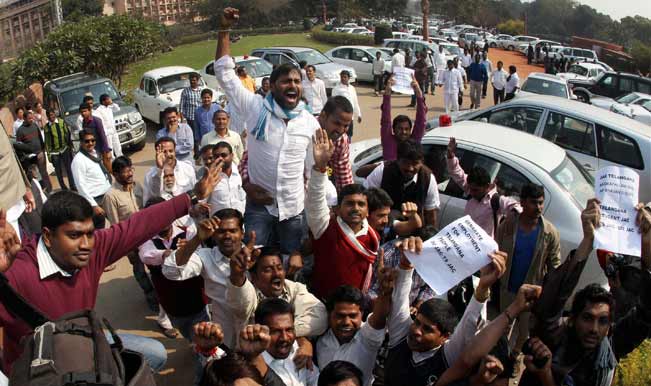 New Delhi, Feb 18: Amid pandemonium and a television blackout of the proceedings, the Lok Sabha Tuesday passed a bill that seeks to carve out a Telangana state out of Andhra Pradesh. Also Read - Amidst Sloganeering And Protests By Opposition, Lok Sabha Adjourned For The Day

The Andhra Pradesh Reorganisation Bill was passed by voice vote in the face of noisy protests by Andhra Pradesh MPs opposed to Telangana as well as a section of the opposition parties. The critics, including Congress minister D. Purandeswari and CPI-M members, massed near Speaker Meira Kumar, some shouting slogans and others holding placards against Andhra Pradesh’s bifurcation. Also Read - Health Authorities in Telangana On Their Toes After 43 Girl Students Test Positive For COVID19 in Sangareddy

But they and others opposed to the division of Andhra Pradesh were simply ignored as amendments to the bills were taken up and then the bill was finally declared passed by the lower house.

So high were the tempers in the house that a group of Congress members from Andhra Pradesh stood near Home Minister Sushilkumar Shinde as he read out the bill in a bid to protect him from anti-Telangana MPs. A fuming Y.S. Jaganmohan Reddy, leader of the YSR Congress which is bitterly against the creation of Telangana, dubbed it “a black day” for the country and called a general strike in Andhra Pradesh Wednesday.

“It is a black day in the history of the country. We are declaring a bandh in Andhra Pradesh tomorrow.” The Andhra MPs were not the only ones to express disgust. As it became clear that the Congress was determined to push through what is popularly known as the Telangana bill, Samajwadi Party’s leader Mulayam Singh Yadav said “this is not the way for democracy to function”.

TDP’s Rajya Sabha member Y.S. Chowdhary denounced Speaker Meira Kumar. “This is daylight murder of democracy. The entire nation should know what the Congress is doing… Half the house is (near the speaker’s podium) … They could have suspended the whole house instead of 16 MPs.”

Trinamool Congress’ Dinesh Trivedi said the spirit of democracy “has been totally killed. I could not be a witness to this murder of democracy. So I protested and walked out,” he said.

External Affairs Minister Salman Khurshid tried to placate the Telangana critics. “It is a historic decision. Now everyone must come together,” he said. In Andhra Pradesh, the developments in the Lok Sabha further sharpened differences between those in Telangana and in the rest of the state known as Seemandhra region. Telangana Rashtra Samithi (TRS) supporters celebrated in Hyderabad and elsewhere in the region. It was gloom in Seemandhra as political activists expressed their disgust and anger. IANS