While a parliament official said it was due to a "technical problem", the opposition termed it a planned "tactical glitch". 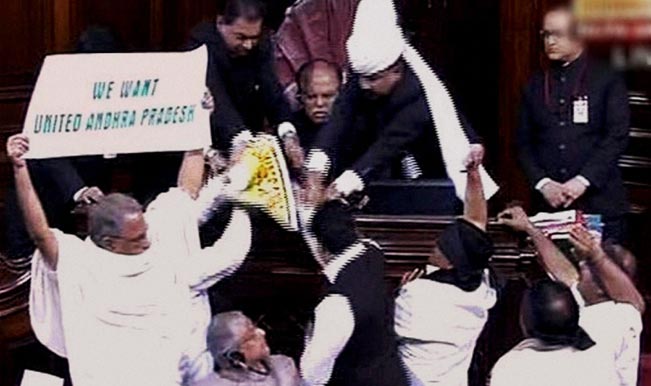 New Delhi, Feb 18: The live telecast of the Lok Sabha proceedings was disrupted Tuesday soon after the house started discussing the bill to create a separate Telangana state. While a parliament official said it was due to a “technical problem”, the opposition termed it a planned “tactical glitch”. Also Read - Breaking News Highlights: 5 Members of Gang in UP TET Question Paper Leak Incident Arrested

They say that the black out of Lok Sabha was due to a ‘technical glitch’. No. It was a tactical glitch.

“I am sorry to inform that the Lok Sabha secretariat is not providing us the audio or video recording of my today’s speech on Telangana bill. I will raise this matter with the speaker tomorrow (Wednesday),” she said.

The disruption of live telecast raised many eyebrows as there was intense curiosity about the proceedings on the bill that was being firmly opposed by a number of MPs from the Seemandhra region. The live telecast on Lok Sabha TV channel abruptly went off the screen minutes after the house met at 3 p.m. to discuss the Andhra Pradesh Reorganisation Bill, 2014.

A few minutes later, the channel briefly put out a message that live telecast would resume shortly but that did not happen. TV news channels later ran news of the proceedings on their tickers.

Lok Sabha Secretary General S. Bal Shekar said the proceedings of the afternoon session could not be telecast due to a “technical problem”. “There was a technical problem. They are attending to it,” Shekar told IANS, adding that he has asked for a report on the issue. He agreed that it was a coincidence that disruption in live telecast occurred when the house took up the discussion on the crucial bill.

YSR Congress leader Y.S. Jaganmohan Reddy alleged that the live telecast “was cut off”. Majlis-E-Ittehadul Muslimeen MP Asaduddin Owaisi also voiced a similar protest. “Why is the government embarrassed? People have a right to see. They have a right to know,” he said.

Janata Dal-United chief Sharad Yadav and Trinamool Congress MP Dinesh Trivedi walked out of the Lok Sabha after the live telecast stopped. “As soon as the debate on Telangana started, the live telecast of the proceedings was stopped and this is beyond tolerance,” Yadav told the media. “So we decided we cannot be a part of such a debate.” IANS