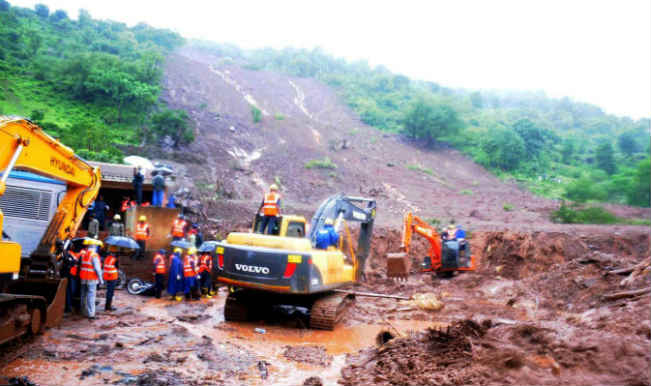 Pune, Aug 2: The overnight toll in Maharashtra’s worst landslide disaster in Malin village of Pune district went up to 73 Saturday morning with no reports of finding survivors, a top official said. “We have recovered 73 bodies so far… Rescue work is still underway,” District Collector Saurabh Rao told IANS. Also Read - What is Congo Fever? Why Maharashtra’s Palghar District on High Alert | All You Need to Know

Teams of the National Disaster Response Force (NDRF) and other agencies have rescued 23 people, including the youngest, a three-month old male child Rudra, from under the debris in the past three days. The village with nearly 200 people was almost entirely buried under a landslide early Wednesday following torrential rain that had lashed the region. Also Read - Unlock 5: Maharashtra Likely to Start Dine-in Services at Restaurants From Oct, to Issue SOPs Soon

Another 130 people are still feared trapped under the rubble, while inclement weather conditions, wet, sticky soil and a foul odour from the decaying bodies of humans and animal carcasses is hampering rescue operations.NDRF officials Friday ruled out chances of finding any more survivors as their gadgets did not indicate otherwise. This will make the Malin tragedy the worst-ever landslide disaster in the state. Prior to Malin, the worst ever landslide incident was in Mumbai’s Sakinaka area which killed over 75 slumdwellers July 13, 2000.

In Mumbai, the Maharashtra government announced an aid of Rs.500,000 to the kin of each of the dead, free medical treatment to all the injured and complete rehabilitation package for the survivors. The package will include complete repair of damaged homes or rebuilding them afresh, providing all official documents, furnishing all household articles and farming requirements to enable them restart their lives.