Banerjee alleged there was something "hanky-panky" in the way the live telecast of the house proceedings was "turned off". 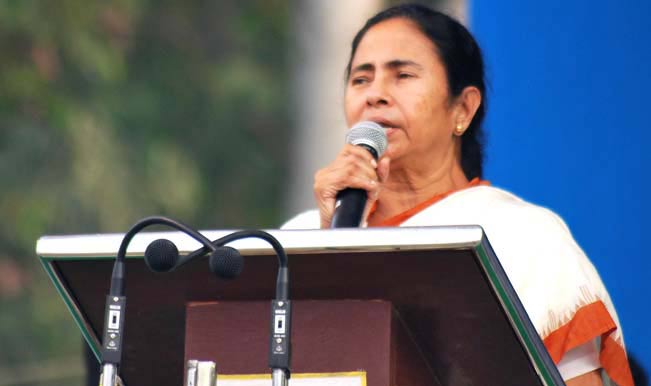 New Delhi/Kolkata, Feb 18: Claiming her party’s demand for division in the Lok Sabha on the Telangana bill was rejected, Trinamool Congress chief Mamata Banerjee Tuesday termed the passing of the law as illegal and asked her party MPs to go to the president on the issue. Also Read - Health Authorities in Telangana On Their Toes After 43 Girl Students Test Positive For COVID19 in Sangareddy

Lashing out against the central government, Banerjee alleged there was something “hanky-panky” in the way the live telecast of the house proceedings was “turned off”. “Our Lok Sabha members asked for a division. We walked out as they did not allow it. It is the prerogative of the members to ask for a division. If a member asks, there has to be voting,” she said. Also Read - Shocking! 80% Women in THESE South Indian States Justify Men Beating Their Wives: Survey

Questioning why the demand for a division was disallowed, the West Bengal chief minister said: “If any member seeks division that has to be allowed. Otherwise, the bill is illegal. I have asked my members to go to the president (Pranab Mukherjee).” Amid pandemonium and a television blackout of the proceedings, the Lok Sabha during the day passed the bill to carve out a Telangana state out of Andhra Pradesh by voice vote in the face of noisy protests by MPs from Seemandhra.

Earlier in Kolkata, Banerjee slammed the Congress-led United Progressive Alliance for tabling the bill just before the elections. “Today they have to move Telangana Bill before elections and create all that golmal (trouble). This is not done,” she said. “Sometimes politicians say some something before elections or at the end of the government’s terms … pass some bills, say some gimmick words. I do not believe that,” she said. IANS