Maruti Suzuki India has stopped production of the iconic car brand that had been carrier for millions of Indian middle class families. 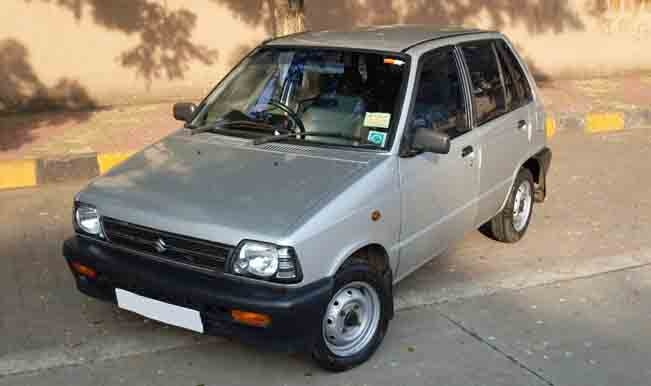 Bringing curtains down on the glorious saga of the Maruti 800 model, Maruti Suzuki India has stopped production of the iconic car brand that had been carrier for millions of Indian middle class families, since last month, said senior official of the auto maker here today.Also Read - Maruti Suzuki Price Increase: Automaker Hikes Prices of Select Models

C V Raman, Executive Director MSIL, said though the car production has stopped, spare parts will be available for customers for the next 8-10 years as per rules. Also Read - Maruti Recalls Over 1.81 Lakh Cars: Here's How To Check If Your Vehicle Needs Attention

The car, that was a breadwinner for many MSL dealers across the country and also first car for many Indian middle class families, may not be available in newer version unlike other MSIL brands. Also Read - Maruti Recalls Over 1.81 Lakh Cars From Models Ranging Vitara Brezza, Ertiga, Ciaz, S-Cross, XL6. Details Here

“Now on the 18th of January we have stopped the M-800 production completely. We have to keep all of them (dies and moulds) for the spare parts requirement. We have to continuously meet the customer requirements. That is our duty to make sure that they get all the parts,” Raman told reporters on the sidelines of launch of its new hatchback Celerio, here.

MSL has stopped selling Maruti-800, that has revolutionised Indian Auto industry, in 13 cities including Hyderabad, Bangalore, Kanpur, Pune since April 2010.

“Our policy is 8 to 10 years we have to keep (the spares available). For all the models which have been phased out till date, we have followed this policy,” Raman added.

MSL redesigned most of its top selling brands such as Alto, WagonR, and Swift in redesigned version.

The car, which was priced at around Rs 50,000 when launched in early 80s is now available over Rs 2.35 lakh (ex- showroom Delhi), according to Maruti-800 official website.

“There could some stock of M800 at the dealer level and I don’t know the exact number,” Raman said.

To a query on the Global NCAP report, he said the test done by UK-based organisation was at 64 kmph, which is at much higher speed than even the regulation in Europe.

“In India, we have a certain regulation today. All the vehicles that sell in India meet the Indian norms,” he said.

Some of the most popular small cars sold in India, including Maruti Alto 800, Tata Nano, Ford Figo, Hyundai i10 and Volkswagen Polo, have failed crash tests putting occupants at a high risk of life-threatening injuries in road accidents, according to UK-based Global NCAP.

On sales, he said this year MSIL may witness 3 to 4 per cent retail sales growth over last year. PTI