Narendra Modi appointed as Prime Minister; To take oath on May 26

The President appointed him the Prime Minister of India and requested him to advise the names of members of the council of ministers. 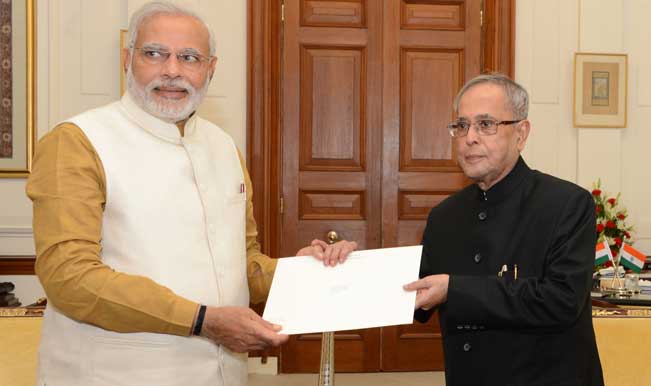 Also Read - PM Modi UNGA Address 2021 LIVE Streaming: When, Where And How to Watch PM Narendra Modi's Speech at UN

New Delhi, May 20: Narendra Modi, who steered BJP and the NDA to a landslide victory in the Lok Sabha elections, was today appointed Prime Minister, ushering in a new era of a non-Congress government with an absolute majority on its own in 30 years. Also Read - PM Modi US Visit: Meeting With President Biden, Quad Summit And UNGA Address | Full Schedule of Events, Timings

“I came to call on the President. The President has given me a formal letter (of appointment as the PM) and has invited me for oath-taking ceremony on May 26 at 6 pm as we had earlier decided,” Modi told the media emerging from the meeting with the President Pranab Mukherjee. Also Read - Modi US Visit: PM to Meet President Biden Today | Here's What to Expect From Their First Tete-a-Tete

Modi’s call on the President came after he was unanimously elected leader of the BJP Parliamentary Party and later at a combined meeting of the BJP and its allies constituting the NDA as leader of the coalition.

Later, a Rashtrapati Bhawan communique said as Modi has been elected leader of the BJP Parliamentary Party and BJP has majority support in the House of the People, the President appointed him the Prime Minister of India and requested him to advise the names of members of the council of ministers.

“The President will administer the oath of office and secrecy on May 26 at 6 PM at Rashtrapati Bhawan,” President’s spokesman Venu Rajamony said.

In his brief interaction with the media outside Rashtrapati Bhawan, Modi displayed the President’s letter appointing him to the top post.

Earlier the President greeted Modi on his landslide victory.

Offering a bunch of flowers, he congratulated him on his “grand victory”.

Today’s scene was vastly different from the summer of 1996 when the then President Shankar Dayal Sharma appointed Atal Bihari Vajpayee as Prime Minister of a minority government that fell in 13 days.

Later, after the 1998 and 1999 elections Vajpayee was again called to form governments only after the then President K R Narayanan was satisfied with letters of support from parties backing the NDA coalition on the numbers.

Before Modi’s meeting with the President, a delegation of NDA leaders led by Rajnath Singh and L K Advani called on the President to convey to him the decision of the BJP and the NDA parliamentary parties to choose Modi as their leader.

“Today we had a meeting of the BJP Parliamentary party and we have adopted a unanimous resolution to elect Narendra Modi as our leader. All the NDA allies were also present. We have requested the President to invite Narendra Modi for the swearing-in as the Prime Minister,” Singh told reporters at the forecourt of the Rashtrapati Bhavan here.

He said BJP has the support letters of 10 allies of the NDA which includes 335 MPs. The letter of a one-member ally–Swabimani Paksh of Maharashtra–was not ready and it would be submitted soon.

Singh said 3,000 people are proposed to be invited for the swearing-in ceremony for which time will announced soon.