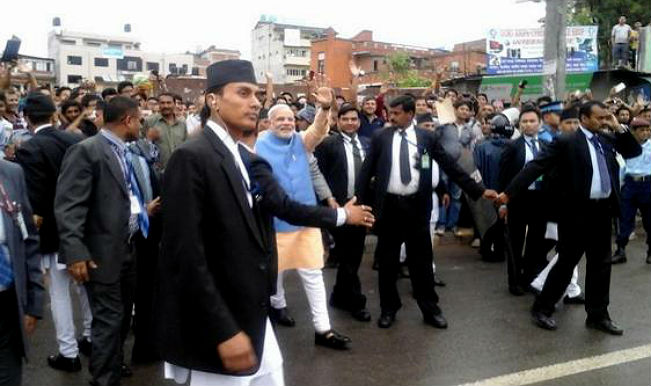 Kathmandu, Aug 4: Indian Prime Minister Narendra Modi’s maiden visit to Nepal made banner headlines in Nepali dailies, with one saying Modi has won hearts and another noting that his speech in the parliament left lawmakers spellbound. Dailies gave wide coverage to Modi’s visit that began Sunday as news were accompanied with photographs of Modi’s address to Nepal’s parliament, his meeting with Nepali counterpart and mingling with the people on the streets. Also Read - India Records Lowest COVID-19 Deaths in 3 Months; Total Tally Surpasses 7.5 Million | Key Points

The newspaper also ran another story about Modi’s $1 billion offer as a soft loan to Nepal. “Modi told Nepali and Indian officials during the delegation level talks on Sunday that he wants to see tangible progress on cooperation in energy sector before the 18th SAARC Summit to be held in Kathmandu in November,” said the newspaper.

Another interesting story was “Modi Mania: Rousing Remarks in Social Media” which said “#ModiInNepal” was the fourth most tweeted subject while keywords like @narendramodi, #nepal, @pmoindia, #modi, buddha, kathmandu and constitution were among the highest trending on Twitter.

Another leading Nepali daily here, Kantipur made banner news over his address in the parliament and noted that his splendind speech left MPs spellbound.

An editorial in the daily said Modi’s visit is meant to jumpstart a new phase in relations between the two countries. “There is much excitement in Nepal, and some believe that all the years of mistrust and suspicion will immediately be overcome. “But as the failure of the power agreements demonstrate, old problems cannot easily be swept under the carpet. It will require sustained effort in order to overcome past problems,” it said.

The newspaper also ran several news items regarding the visit of Modi with half dozen photos in first and second pages. Vernacular newspapers too ran banner news of Modi’s visit, his address to the house and his engagements in Kathmandu.

Modi’s reaching out to public in the street of Kathmandu also caught the attention of the media. “I was shocked when I saw PM Modi came out from his car and started shaking hands with public,” Arunakar Chand, an engineer, was quoted as saying.

Then people started chanting Narendra Modi “jindabad, Modi ko jay hos”, he said. Then he waved his hands which was really an emotional event for every one present, he said.