Rescue workers looked for signs of life under the heap of mud and stones today at the landslide-hit Malin village, where 35 bodies have been pulled out. 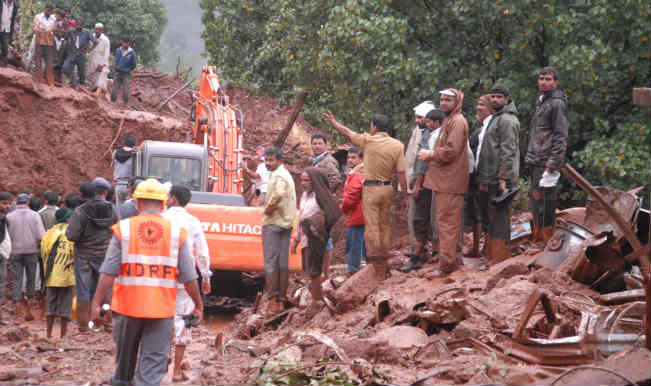 Also Read - Nobody Cured of Covid-19 Due to 'Bhabhiji Papad': Shiv Sena's Sanjay Raut Takes a Dig at Govt in Rajya Sabha

Pune, Jul 31: Rescue workers waged a grim battle with a hostile weather and difficult terrain, looking for signs of life under the monstrous heap of mud and stones today at the landslide-hit Malin village, where 35 bodies have been pulled out till now amid fading hopes of more survivors. Personnel of National Disaster Response Force (NDRF), which is leading the rescue efforts, have pulled out nine survivors from the rubble. Also Read - India Happiness Report 2020: Mizoram, Punjab, Andaman and Nicobar Islands Top List; Maharashtra & Delhi at Bottom

Intermittent rain continued to hamper the rescue operation being carried out since yesterday morning when a massive landslide buried under its debris 44 houses with an estimated 160 people trapped inside. The 35 dead included 16 women and five children, District Control Room said today. Also Read - 'I Am With BJP-RSS Now, Will Control 'Goondagardi' Says Ex-Navy Officer Madan Sharma Who Was Attacked by Shiv Sena

A mass cremation of several victims was performed today at the village by their grieving relatives. The hilly terrain that nestled the village, which sustained itself on a modest paddy crop grown on the sloppy land, was making the movement of JCBs and dumpers difficult with rescuers carrying an added burden of ensuring the safety of the prospective survivors as they operated the machinery to clear the huge mound with abundant caution.

Union Home Minister Rajnath Singh visited Malin village, the scene of the tragedy over 100km from here in Ambegaon taluka, and announced an assistance of Rs Two lakh to the next of kin of each of the deceased from PM Relief Fund. “It will be premature to comment on the reasons behind the incident before any inquiry is conducted by Geological Survey personnel,” he said when asked if deforestation and subsequent soil erosion had led to the disaster.

Forty-four houses and a temple were flattened early last morning when loosened earth from a hillside hurtled down the slopes taking large parts of the tribal village in its sweep. Slippers, coking gas cylinders, cycle parts, wheels jutted out of the rubble. Also to visit the village was NCP President Sharad Pawar, who too, promised all help from the State Government and measures to avoid recurrence of such disasters.

Meanwhile, in Mumbai Chief Minister Prithviraj Chavan briefed his Cabinet about the tragedy. According to official sources, he told the Cabinet that people living in dangerous locations, which are prone to landslides, would have to be shifted elsewhere to prevent such incidents. Chavan said about 300 NDRF personnel are engaged in rescue operations.