BJP has offered seven seats to LJP, which is pressing for nine seats in Bihar. 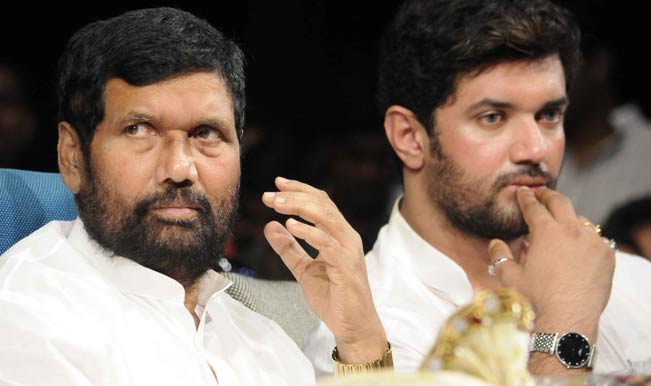 New Delhi, Feb 26: Amid indications of a tie-up with BJP for Lok Sabha polls, Ram Vilas Paswan’s LJP is meeting today to take a final call on the issue. Also Read - Himachal Pradesh Schools To Remain Close Between These Dates. Details Here

A meeting of the LJP Parliamentary Board is being held at a time when the party is unhappy with the delay in firming up seat-sharing arrangement with Congress and RJD. Also Read - Is Assam Govt Imposing Lockdown Again? CM Himanta Biswa Sarma Clears Air, Makes THIS Statement

Chirag Paswan, son of LJP chief Ram Vilas Paswan, who also heads the Parliamentary Board, has already said there is “distress” in LJP over the way the seat-sharing issue has been dragging with Congress and RJD.

Party sources said LJP has developed a trust deficit with RJD chief Lalu Prasad. LJP fears that RJD could field dummy candidates in some seats spared for it as was done last time, they said. Several BJP leaders have met Chirag. Talk is that BJP has offered seven seats to LJP, which is pressing for nine seats in Bihar.

BJP MP Shahnawaz Hussain had called on LJP chief a few days back while senior BJP leader Ravi Shankar Prasad had visited Paswan on January 14 on the day of Makar Sankranti. LJP sources said a final decision on the alliance issue with BJP is expected to be announced today. PTI