Telangana bill gets Parliament nod; Seemandhra to get special status

Prime Minister assured special status will be given for five years to Seemandhra region - the residual state of Andhra Pradesh following creation of a separate Telangana. 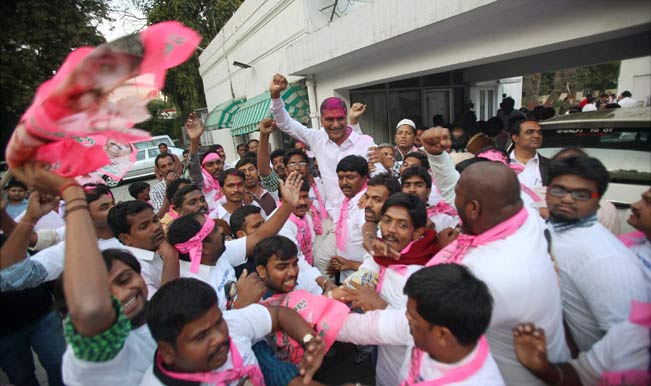 New Delhi, Feb 20: Parliament Thursday gave its approval to carve out Telangana out of Andhra Pradesh as India’s 29th state, with the Rajya Sabha passing the bill for creation of the new state by a voice vote amid bedlam. Also Read - 12 Rajya Sabha MPs Suspended For Rest of Winter Session For Ruckus in Previous Session

Intervening in the debate on the bill which was marked by several adjournments and slogan shouting by members opposed to the creation of the new state, Prime Minister Manmohan Singh sought to reach out to Seemandhra, announcing a special package for the region. Also Read - Amidst Sloganeering And Protests By Opposition, Lok Sabha Adjourned For The Day

Members of Communist Party of India-Marxist and DMK staged a walk out before the bill was passed, while the Shiv Sena, Trinamool Congress and Samajwadi Party were among the parties that opposed the bill.

Seemandhra members belonging to the Telugu Desam Party (TDP) raised slogans of ‘Save Andhra Pradesh, Save Democracy’ near the chairman’s podium during the debate on the bill.

Manmohan Singh, who had a protective ring of Congress members around him as he spoke, assured that special status will be given for five years to Seemandhra region – the residual state of Andhra Pradesh following creation of a separate Telangana.

“For purposes of central assistance, Special Category Status will be extended to the successor state of Andhra Pradesh comprising 13 districts, including the four districts of Rayalaseema and the three districts of north coastal Andhra for a period of five years. This will put the state’s finances on a firmer footing,” he said.

Before the passage of the bill, Leader of Opposition Arun Jaitley said that there was need to amend the constitution on proposal of powers given to the governor concerning law and order. However, the government did not agree to his suggestion.

Jaitley said that the process of creating Telangana by bifurcating Andhra Pradesh should be “legally correct”.

“Law and order belongs to state. Governor is a representative of the central government. Can you do so (give him the powers of law and order) without amending constitution?” he asked.

After the bill was passed, Parliamentary Affairs Minister Kamal Nath expressed his happiness, saying that there was demand for Telangana state for almost 60 years.

Home Minister Sushilkumar Shinde said that the bill had been passed with support of several parties. IANS