Telangana: From becoming part of Hyderabad state to a separate state

With Lok Sabha passing the Telangana Bill, the movement proves successful for the trouble state. 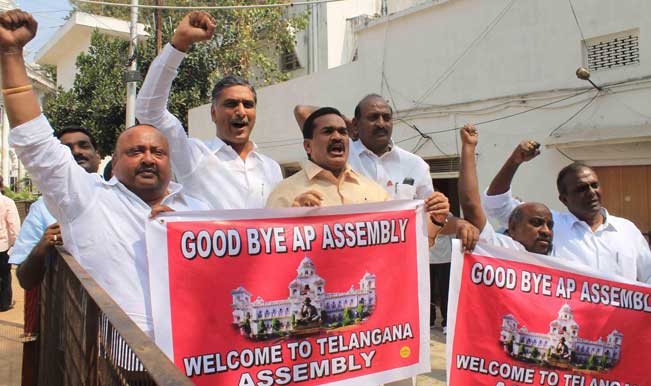 Hyderabad, Feb 18: With the Lok Sabha passing the bill for bifurcation of Andhra Pradesh Tuesday, decks have been cleared for formation of Telangana as 29th state in India. Following are the major events in the history of Telangana since 1948: Also Read - Shocking! 80% Women in THESE South Indian States Justify Men Beating Their Wives: Survey

Nov 1, 1956: Telangana merged with Andhra State, which was carved out of Madras State, to form Andhra Pradesh, a united state for Telugu-speaking people.

2009: TRS contested elections in alliance with TDP but its tally came down to two Lok Sabha and 10 assembly seats.

Dec 9: Centre announced decision to initiate the process for formation of Telangana state.

Oct 3, 2013: Union cabinet approved the proposal to divide Andhra Pradesh. A Group of Ministers (GoM) was constituted to prepare the roadmap after consultations with all stakeholders.

Dec 5, 2013: Union cabinet approved draft Andhra Pradesh Reorganisation Bill 2013 prepared on the basis of recommendations by the GoM. Bill sent to President Pranab Mukherjee with a request to make a reference to Andhra Pradesh legislature to obtain its views under Article 3 of the Constitution.

Dec 9: The President gave time till Jan 23 to the state legislature to give its views.

Dec 12, 2013: Bill brought to Hyderabad in a special aircraft and amid tight security.

Dec 16, 2013: Bill introduced in both houses of state legislature amid clashes between Seemandhra and Telangana lawmakers.

Jan 8, 2014: After disruptions for several days, debate finally began on the bill in assembly and council.

Jan 30, 2014: Amid ruckus, both houses of state legislature passed by a voice vote official resolutions, rejecting the bill and appealing to the President not to send the bill to parliament.

Feb 7, 2014: Union cabinet cleared the bill and rejected Seemandhra leaders’ demand to make Hyderabad a union territory. Bill sent to the President for his approval to table it in parliament.

Feb 13, 2014: Bill introduced in Lok Sabha amid clashes between MPs from Seemandhra and Telangana. L. Rajagopal, a MP from Seemandhra, used pepper spray in the house. Speaker suspended 16 MPs including Rajagopal for rest of the session.