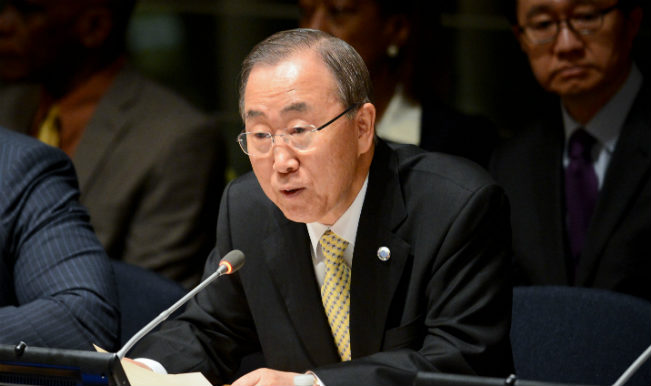 Also Read - The International Day of Peace 2020: Date, History And Significance of This Day

“The secretary general strongly condemns the killing of at least 10 Palestinian civilians in shelling outside of an UNRWA school in Rafah providing shelter to thousands of civilians,” Xinhua quoted a spokesperson of Ban as saying in a statement. Also Read - International Youth Day 2020: History, Significance of The Day And Theme For This Year

At least 10 people were killed Sunday morning when an Israeli shell hit a UN-run school-shelter in southern Gaza city of Rafah.

“The attack is yet another gross violation of international humanitarian law, which clearly requires protection by both parties of Palestinian civilians, UN staff and UN premises, among other civilian facilities,” the statement added.

The Israeli offensive which started July 8 on the Gaza Strip has killed 1,766 people and left 9,500 injured, the Gaza health ministry said on Sunday. Ashraf al-Qedra, the spokesperson of the health ministry in Gaza, said that 54 Palestinians were killed Sunday due to air strikes and shelling by tanks on various areas in the Gaza Strip.

Paramedics said that six Palestinians were killed in an air strike on a house in central Gaza Strip. Sunday’s shelling was not the first time that Israeli forces targeted a UN facility for sheltering.

On Wednesday, 15 people were killed when Israeli artillery fire hit a school used as a shelter in the northern city of Jabaliya. The Gaza-based al-Mizan rights group said in an emailed statement that more than 10,000 houses were damaged by the intensive Israeli air strikes on the Gaza Strip.

Meanwhile, Abbas urged the UN, the US, the European Union, Russia and China to exert pressure on Israel and end its war on the Gaza Strip that killed over a thousand Palestinians.

“By rejecting the ceasefire, Israel will be fully responsible for the serious consequences of continuing its war on the Gaza Strip,” Abbas said. Egypt had invited Israeli and Palestinian sides for talks in Cairo on the proposed plan. A Hamas delegation arrived in Egyptian capital Cairo Sunday for talks with Egyptian mediators on a possible ceasefire in Gaza.

Since Saturday midnight, the Israeli Air Force struck 15 targets in Gaza after a relative decrease in the number of rockets launched from the strip toward communities in Israel. One soldier was injured on Sunday in a clash with militants.

Israel has confirmed that 61 soldiers have died in combat, while Palestinian attacks also killed three civilians in Israel. Also over the weekend, the Israeli security cabinet decided that Israel will not strive to reach a ceasefire with Hamas and decided not to send an Israeli delegation to official talks in Cairo.

Israel also withdrew majority of its ground forces from the Gaza Strip throughout Saturday and Sunday Almost half a million Palestinians have been displaced since the start of Israeli military operation July 8, among whom 240,000 are currently residing in the UN-run school shelters.