The party will touch new heights under his leadership. 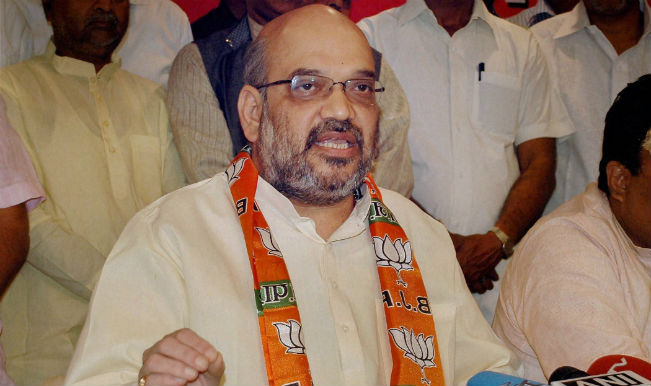 New Delhi, July 9 : Amit Shah, a Narendra Modi confidant who led the BJP to a spectacular electoral win in Uttar Pradesh, was Wednesday named its new president, with colleagues expressing confidence that he will take the ruling party to greater success. Prime Minister Modi, who counts the 49-year-old Shah as a close confidant, said Shah’s elevation would help the Bharatiya Janata Party to expand its influence and become stronger in the country. Also Read - A Uniform Body Of Law Strengthens The Sovereignty Of State And Uniform Civil Code Is The First Step Towards It

Rajnath Singh made the widely expected announcement about Shah after a meeting of the BJP’s parliamentary board. Once this was done, a beaming Shah — a share trader by profession — accepted sweets and bouquets from party colleagues including Modi, Rajnath Singh, L.K. Advani and Murli Manohar Joshi.

“Amit Shah is the new president,” Rajnath Singh told the media as Modi and Shah looked on.  Rajnath Singh said Shah had been chosen for the post for his “organisational and management skills” which he said were seen in Uttar Pradesh during the Lok Sabha election.

In an extraordinary performance that stunned foes and friends alike, the BJP bagged 71 of the 80 Lok Sabha seats in the state after Shah spearheaded the party campaign like a warrior possessed. Two other seats went to a BJP ally, Apna Dal. The Congress was left with just two seats, the Samajwadi Party got only five (with Mulayam Singh winning two of the seats) while the Bahujan Samaj Party was wiped out.

Ever since, Shah — who rarely interacts with the media — was widely seen as the front-runner for the top party post. First elected to the Gujarat assembly in 1997, Shah describes his hobbies as cricket, reading and social service. Over the years, he emerged as Modi’s most trusted political aide in Gujarat.

Once Modi was named the BJP’s prime ministerial candidate, he ensured that Shah was made the election campaign chief in Uttar Pradesh, realizing that without a sweep in that state the party’s future would be bleak. In his tweets, Modi also thanked Rajnath Singh “for his great leadership, under which the party scaled new heights of success”. “With the blessings of party elders and selfless efforts of karyakartas, (the) BJP’s mission of creating a strong and developed India continues.”

Other BJP leaders also paid glowing tributes to Shah. “He is a very good organiser, a very committed worker… His elevation will help the BJP in social expansion and gaining organisational strength,” party vice president Mukhtar Abbas Naqvi told IANS. Balbir Punj, a BJP vice president, told IANS: “He is a very inspiring leader, very hard working. He knows all the ‘karyakartas’ (functionaries). The party will touch new heights under his leadership.”