Rana told a TV channel that he will continue to keep a moustache as it is a matter of "self-respect" for him.

Bhopal: In a bizarre turn of events, the Madhya Pradesh Police have suspended a constable for indiscipline as he grew his hair and moustache despite being told to trim it, reported news agencies on Sunday. The suspension order issued on Friday to constable Rakesh Rana, posted as a driver in the police’s motor transport wing, surfaced on various social media platforms on Sunday. “I was asked to cut my moustache to a proper size but I refused. Never before in my service, I was asked to do so,” Rakesh Rana was quoted as saying by ANI.

Assistant Inspector General, Cooperatives Fraud and Public Service Guarantee, Prashant Sharma, who issued the order, told PTI that Rana was suspended as he did not follow his senior’s order about correcting his appearance. “When his appearance was checked, the constable was found with hair grown and a moustache till the neck. He was directed to trim the hair as his turnout was awkward, but he did not follow the directives,” the official said.

Sharma also claimed the constable was adamant on keeping long hair and moustache, which was not in accordance with norms for the uniformed personnel. Hence, he was suspended as part of disciplinary action, the official said.

Here’s a copy of the order issued by Madhya Pradesh Police to Rakesh Rana: 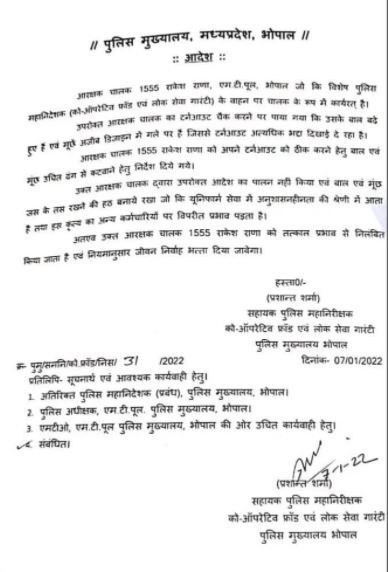 The constable was posted as the driver of Special Director General, Cooperatives Fraud and Public Service Guarantee section of the Madhya Pradesh Police. He told a TV channel that he will continue to keep a moustache as it is a matter of “self-respect” for him. Claiming that he always wore a proper uniform, Rana said he will not compromise on this issue despite the suspension as he had been keeping the moustache since a long time.

(Based on agency inputs)