Brooklyn’s Raga Enthusiasts Creating a Tradition in The Big Apple

Though a tradition takes years to establish itself, a group of Indian raga enthusiasts are well on their way to making one for their increasingly multi-ethnic, and hip central Brooklyn neighborhood of Prospect Heights. 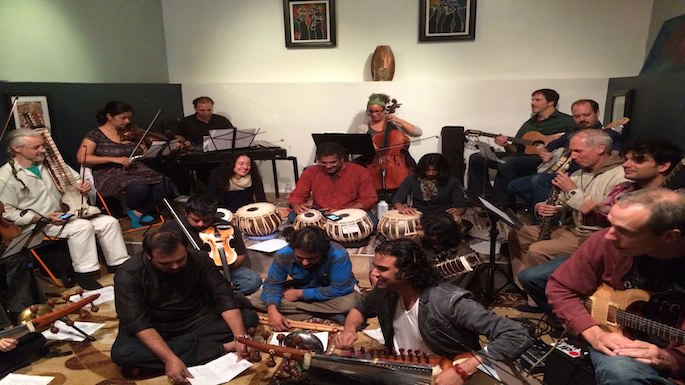 Though a tradition takes years to establish itself, a group of Indian raga enthusiasts are well on their way to making one for their increasingly multi-ethnic, and hip central Brooklyn neighborhood of Prospect Heights. Also Read - Timings of These 10 Historical Monuments Extended to 9 PM - Complete Details Here

Two and a half years ago sitar player Neel Murgai and his friends, tabalchis Sameer Gupta and Ehren Hanson, sarod player Camila Celin, Eric Fraser on the bansuri, and violinists Arun Ramamurthy and Trina Basu, got together to form the Brooklyn Raga Massive.

Meeting every Wednesday at Art Cafe on Pacific St. to play and jam, the group finds a regular audience of 30 to 50 people, and jamming sometimes goes on into the night despite it being the middle of the week. “We are not limited to just Brooklynites! Our audience comes from all over the tri-state area and a couple of our regular musicians drive an hour from New Jersey every week,” Murgai says.

They call themselves “a collective of like-minded forward thinking musicians rooted in Indian classical music.” And apparently there’s a critical mass of those type of people in Brooklyn right now. “That’s how we can sustain our weekly concert and jam session,” he told Desi Talk. Every month they put out a program of the Wednesday performances.

To get a taste of the kind of music enjoyed by people who religiously turn up at Art Cafe from as far as New Jersey, the November flyer features musicians who have been trained in the foremost gharanas of India — the two founding members Fraser and Gupta presenting a “true North Indian Classical throw down,” on Nov. 5; that was to be followed on the 12th by Jay Gandhi on bansuri and Abhik Mukherjee on sitar with a jugalbandhi; On the 19th Hindustani classical vocalist Radhika Joshi will be joined on the tabla by Amod Dandawate; and on the 26th Saxophone brothers Jonathan and Andrew Kay will play tenor, alto and soprano saxophones in Hindustani style.

Some of the formalities often associated with an Indian classical concert have been stripped away by organizers, evident first off, by the fact that the venue is a café-cum-bar, serving alcohol in an intimate setting, more like a house concert, not the usual rarified formal atmosphere created for classical performances in India.

Art Cafe has a large court-yard as well as the performance space, so there is room to be social as well as have a serious listening environment, organizers say.

This appeals to the regulars and the café that supports this Wednesday night event. Those there to listen can also approach the players, share a drink with them after the set and the venue does well on what might otherwise have been a slow night. “It is definitely a haunt for many people, the musicians and our regular fans. There is a buzz around the scene that we have created,” Murgai says.

Art Cafe though is not the only venue where Brooklyn Raga Massive is able to show off its talent and spread the raga gospel. It has always been presenting at different venues.

The weekly, relaxed venue is the mainstay but the group does more formal concerts alongside. For instance, this Nov. 21, the Neel Murgai Ensemble and Karavika, another group of Brooklyn Raga Massive members, is performing “raga chamber-jazz” at Greenwich House. NME combines Murgai’s sitar with violin, cello and tabla. The raga and tala of Indian classical music is the root of their sound, but they freely embrace other territories including jazz, minimalism and experimental music.

Some of Murgai’s original compositions and rearrangements of traditional material have been released in a self-titled debut CD by Innova Records to critical acclaim, including a feature on NPR’s Song of the Day. They have performed at Mexico’s 2012 Sinaloa Cultural Festival, the Sun to Stars Festival in New York, Le Poisson Rouge, and the Museum of Natural History, and other venues.

“Ours is definitely a movement towards expanding the popularity and visibility of Indian classical music,” Murgai says.