After years of lobbying, the Indian American community achieved its objective of getting the FBI and the Justice Department to include Hindus and Sikhs in hate crime data collection. 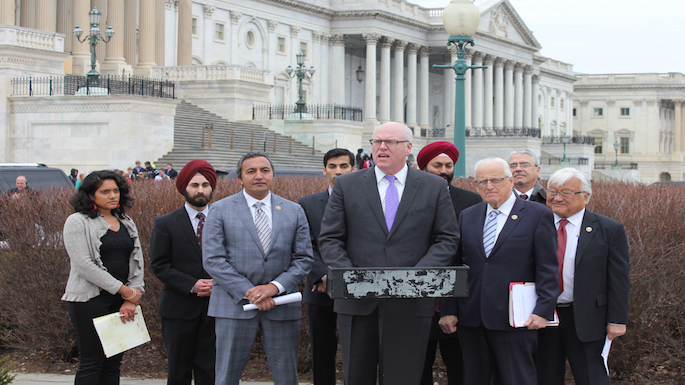 After years of lobbying, the Indian American community achieved its objective of getting the FBI and the Justice Department to include Hindus and Sikhs in hate crime data collection. Sikhs, who bore the brunt of hate crimes, carried out a concerted lobbying campaign demanding they be listed as a category for FBI reporting. Their campaign took on an urgency following with the Aug. 5, 2012 massacre at a gurdwara in Oak Creek, Wisconsin when a White supremacist shot down six Sikh devotees.

“Until now, anti-Sikh hate crimes were not recognized by the FBI,” Rajdeep Singh, director of Law and Policy at the Sikh Coalition, noted in a release. “Year after year, Sikh Americans were being targeted for harassment and violence because of their distinct identity,” he said adding that while this new recognition by the FBI was welcome, more refinements were needed to improve the system.

Those who led the campaign to get law enforcement to include data on hate crime against Sikhs and Hindus, included several lawmakers, especially those representing districts where a significant number of Indian-Americans and South Asians live, viz., parts of New York, New Jersey and California. Several organizations including the Hindu American Foundation, the Sikh American Legal Defense and Education Fund, South Asian Americans Leading Together, and the South Asian Legal Defense and Education Fund, lauded the new regulations adopted by the FBI and the Justice Department.

Organizers of the campaign got together on Capitol Hill to celebrate what they describe as the final step in the long-fought effort to encourage the federal government to finally begin tracking and quantifying hate crimes against these at-risk communities.

“Time and time again, we have seen vicious attacks on members of Sikh, Hindu and Arab American communities,” Rep. Joe Crowley, D-NY,  is quoted saying in a release. Tracking hate crimes is more than just putting a number in a column, he said. It equips law enforcement agencies with resources needed to help prevent such attacks.

Since 9/11, when an Indian-origin gas station owner became the first victim of anti-Muslim hate crime, South Asians have occasionally been mistaken as Middle-Easterners. Just in the last few months several hate crime incidents took place in quick succession — an Islamic Center, a Hindu temple, two Muslim families and an Indian grandfather had been the target of hate.

“I hope that the community will feel more comfortable coming forward and reporting incidents so that we can track the true extent of this problem,” Rep. Grace Meng, D- NY, said in a release referring to the new regulations for colleting date on hate bias crimes.

Rep. Ami Bera, D- California, the only Indian-American in Congress, said he had been campaigning for this since getting elected more than two years ago. He lauded the Justice Department and the FBI for the formal inclusion of Sikhs, Hindus and Arab-Americans in the FBI training manual and the new effort to track crimes against them, step which would confront hatred and increase public awareness. “This is a big win for these communities, and a huge win for justice,” Bera said.

According to Rep. Judy Chu, D-California, there has been a more than 300 percent increase in hate crimes in California alone post-9/11, mostly against Arab, Muslim, Sikh, and South Asian Americans.

“These are crimes of the worst kind that make entire communities fearful,” Chu noted.