An accomplished Bharatnatyam and Kucchipudi dancer will become a judge in a matter of few days, creating history not just in New York but also in the country. 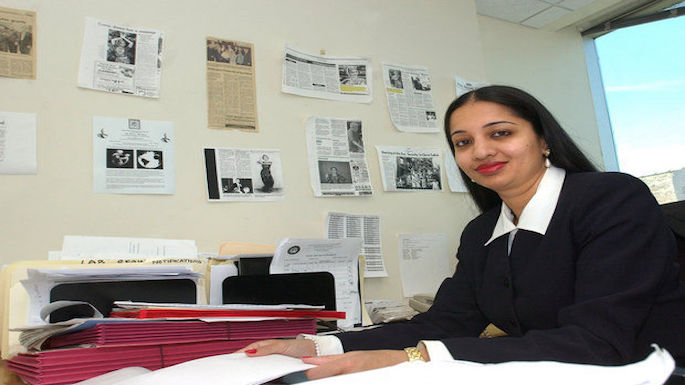 An accomplished Bharatnatyam and Kucchipudi dancer will become a judge in a matter of few days, creating history not just in New York but also in the country.

Raja Rajeswari, assistant district attorney in Staten Island, N.Y., will be sworn in as a criminal court judge April 14. New York City Mayor Bill de Blasio nominated her and among the many recommendations on her behalf, the South Asian Bar Association of New York gave her a ringing endorsement, Rajeswari told Desi Talk. She will be the first female judge of South Asian and Indian-American descent ever to become a judge in New York City.

In an interview with Desi Talk, Rajeshwari revealed she was somewhat of a child prodigy in dance who began learning the art at the age of two, had graduated in dance by the time she was five, and was teaching at her mother’s dance school in India when she was 10. Today, Rajeswari lives in Staten Island with her husband Michael Christie, a real estate magnate, and her daughter Padma, 18.

Her commitment to public service drew her to law she said. “I wanted to give something back other than art and culture, to enrich my community with legal expertise, and abolishing gender inequality.”

She observed gender inequality even before coming to the U.S. at the age of 16, when many girls with immense potential were married off at 14 and 15, in India. While practicing law in New York she has dealt with and seen numerous cases of spousal and child abuse within the South Asian community, Rajeswari said.

Daughter of dance maestro Padma Ramanathan who died more than 20 years ago in a tragic accident, and Krishna Ramanathan of Chennai, who died from Lymphoma about a year ago, Rajeswari is considered a highly successful prosecutor.

She told Desi Talk she was with her mother when the accident happened, and at the age of 18, she was suddenly left bereft and broken. It was the kindness of Indian-Americans and Sri Lankan-Americans in Staten Island who surrounded her with love and supported her, that she is what she is today, she noted.

A prosecutor for more than 16 years, Rajeswari graduated from Staten Island Community College with a full scholarship. She did law at Brooklyn Law and joined the Staten Island District Attorney’s Office immediately after that in 1998. Because of her experience performing before large crowds and in public speaking, Rajeswari said, being a prosecutor was a breeze. She has secured the prosecution of some high profile sexual predators and other criminals during her tenure at the DA’s office. One of her biggest successes was the conviction of Carlos Rosario, whom Rajeswari calls “the poster child of predatory sexual assault.” He was the first to be convicted under the Predatory Sexual Assault law in 2009, for raping children and videotaping hundreds of others. “He’s never coming out,” Rajeswari told Desi Talk.

Members of the Malayalee Association of Staten Island said they were thrilled by her appointment. “We are extremely proud of her getting this opportunity to serve,” S.S. Prakash, former president of MASI told Desi Talk. Dr. Ramachandran Nair who has known the family for decades, told Desi Talk Rajeswari would make a great criminal lawyer but she was more interested in public service than making money.

Rajeswari heads the Padmalaya Dance Academy named after her mother, and her troupe performs at many community functions and Hindu temples for free. “My mother was my guru,” she said.