A New Jersey man was sentenced last week to 46 years in prison for sexual attacks on five women over five weeks in 2012. 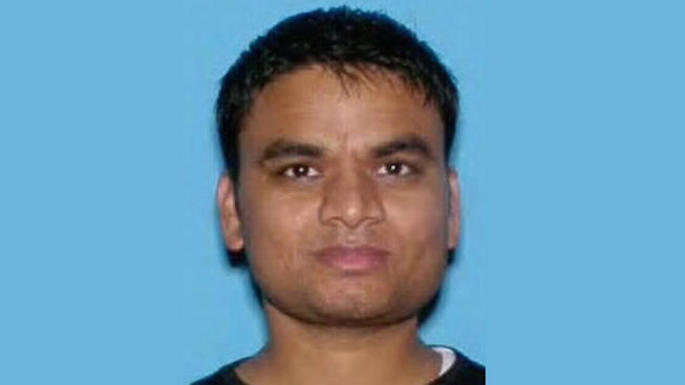 A New Jersey man was sentenced last week to 46 years in prison for sexual attacks on five women over five weeks in 2012. Hiten Patel of Egg Harbor Township must serve at least 38 years and three months of a 46-year sentence before he is eligible for parole under the No Early Release Act.

On Feb. 12, an Atlantic County jury convicted Patel, 36, of sexually assaulting five women, some of them while impersonating an undercover police officer and using an imitation gun to threaten them. He was convicted of 22 of 34 counts, including multiple counts of aggravated sexual assault, attempted sexual assault, possession of an imitation firearm, impersonation of a law enforcement officer, terroristic threats and one count of attempted robbery and criminal restraint, a statement from the Atlantic County Prosecutor’s Office said.

Patel was arrested on Aug. 2, 2012, after Atlantic City Police Detectives, along with assistance from the Federal Bureau of Investigations, linked him to at least 10 sexual assaults in the city. Patel was initially offered a plea deal that would have allowed him spend only 30 years in prison, but he rejected it.

“I have not committed this crime. I am not a criminal,” news reports quoted Patel as saying before sentencing. Three of Patel’s victims spoke at the April 2 sentencing, admitting that they were working as prostitutes when they met him. But what started as a “date” turned violent when Patel pulled a gun on the women, they said. The gun, it would later be found, was a toy he fashioned to look real.

However, at his trial in February, Patel testified that he was addicted to sex with prostitutes, nearly 200 of them, and that he never attacked the women. He said he had a toy gun fashioned to look like a real gun because he had previously been the victim of robberies as he trolled Atlantic City’s Pacific Avenue to feed his addiction to paid sex.

During the two-week-long trial, seven women testified that Patel had attacked them, and recounted being threatened and sexually assaulted at gunpoint. Several of the victims recalled similar accounts of how Patel threatened them and sexually assaulted them at gunpoint, the Press of Atlantic City reported. Some testified that he also choked them during the attacks, while others said he would order them to undress. Some escaped, but others were forced to have sex, while Patel held them by their throats.

Though not all of Patel’s victims were prostitutes, the state argued that Patel chose prostitutes because he believed they were unlikely to go to the police.

During the trial, one of the victims, an 18-year-old Delaware girl, testified that Patel picked her up under the pretense of giving her a ride to the bus station. But when Patel locked the doors, threatened her and pulled a gun on her, the girl escaped by jumping from the moving van, and while fleeing, was picked up by a New Jersey Transit bus.

According to nj.com, the bus driver testified at trial that the girl told her “someone tried to rape her.” She was later taken to hospital where she was reportedly treated for a serious wound to her head and abrasions on several parts of her body from hitting the pavement.

The last victim, a 21-year-old Camden County woman, was instructed to get in the van while Patel impersonated an undercover detective by using his security badge from his former job with a Federal Aviation Administration private contractor. He then threatened her with the imitation gun and sexually assaulted her in the back of the van.

At the time, Patel had already been under investigation as a suspect in a series of similar sexual assaults. Atlantic City police officers, who observed the victim fleeing the van, approached her and she hysterically told them she had been sexually assaulted by a man with a gun. Patel was pulled over in the van shortly thereafter and arrested. DNA evidence linking Patel to the victim was subsequently obtained by police, nj.com reported.

“When Hiten Patel threatened his victims with an all-too-real looking handgun, he instilled fear and took away their freedom of action,” Assistant Prosecutor John Flammer, said. “Today’s sentence shows that all of these women, no matter what their life circumstances, are entitled to the same basic rights that all of us enjoy—the equal protection of the law—whatever their past, present or future they are no less worthy of that protection than anyone else.”

Despite being billed as a sex offender and a serial rapist, Patel seems to have received the support of his wife, Bhavana Patel, who according to several news reports was seen crying and begging for her husband to come home at the April 2 sentencing.

During the February trial, a dozen people, including Bhavana Patel, Patel’s wife of 11 years, testified as character witnesses, describing Patel as honest, peaceful and law-abiding.

“He’s very peace-loving,” Bhavana Patel said of her husband. “He’s a very caring, supportive, tender human being.” During the April 2 sentencing, Bhavana Patel told the judge her husband was a supportive partner to her and a wonderful father to their children.

But Sujata Warrier, co-founder and long-time member of Manavi, a New Jersey-based women’s rights organization, does not rule out the role of “family pressure” in Bhavana Patel’s reaction. She may say he’s a good father, etc., Warrier says, but notes that one does not know her background or constraints.

“He was convicted of raping the women and he’s being punished for what he did,” Warrier told Desi Talk. “I am not at all surprised by his trolling and paying for sex,” she said, adding, “Men across the board indulge in paid sex, it’s a sense of entitlement. And look at all the trafficking and other cases around the country.

Sentencing in Patel’s case was delayed because of several reasons including his mental evaluation as well as his firing of his first defense attorney because of conflicts. Patel, who has been out on bail since his arrest with nothing more than a tracking anklet, had that bail revoked upon his conviction.

Patel’s case was also surrounded by other obstacles, including several quarantines at the Atlantic County Justice Facility in Mays Landing, where he was housed since Feb. 12, nj.com reported.