Chinna Jeeyar Swamiji, a follower of millennium-old saint Bhagawad Ramanujanacharya Swami, is in the United States on an extended visit to raise funds for an ambitious project and architectural marvel: the Statue of Equality. 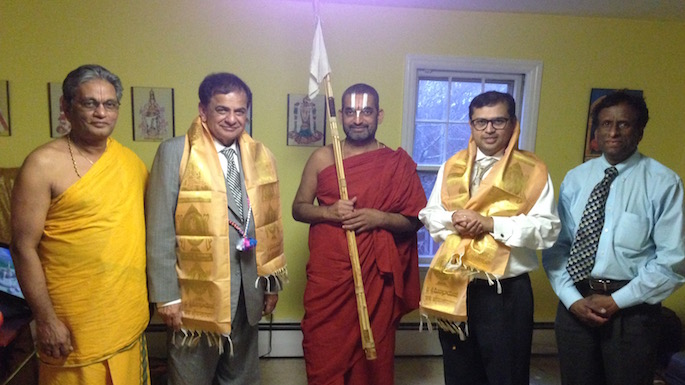 Chinna Jeeyar Swamiji, a follower of millennium-old saint Bhagawad Ramanujanacharya Swami, is in the United States on an extended visit to raise funds for an ambitious project and architectural marvel: the Statue of Equality.

The plan for the Sri Ramanuja Sahasrabdi Project in Samshabad, on the outskirts of Hyderabad, shows a vast complex of buildings on 45 acres of land. It is shaped like the figure 8, and will house the history and teachings of the saint who was born in 1017 and who challenged the caste system and preached equality of all. The buildings will be topped by a 216 foot statue of the saint himself. The complex includes 108 Divya Desams or temples, aims to meet educational and social service needs of the community, and is built with an eye to cultural traditions and environmental standards. The temple is expected to be opened to the public in 2017, to celebrated 1000 years of Ramanujanacharya and cost an estimated $80 million.

“He stood for equality between castes and creed. These social stigmas were so strong at that time and unfortunately because of politicians, they are safeguarded,” Chinna Jeeyar said. “This great guru (Ramanujanacharya) believed in equality of all people before God. He found records in our scriptures, the Geeta, the Puranas, where God said everybody is fee to approach me. I am here to propagate the vision of equality needed across the world.”

The temple in Samshabad will be a place of learning where exhibits denoting the various inspiring incidents in the life of the thousand year old saint will be created. “If even 1 or 2 out of 100 people who visit the temple try to implement those visions, it is worth it,” Chinna Jeeyar contended.

Indian-American devotees of Ramanujanacharya and followers and supporters of Chinna Jeeyar, plan to raise $20 million to support the temple project over the next two years, said Sarma Allaki, an advisory board member of the New Jersey chapter of the Jeeyar Education Trust, a non-profit arm founded by Chinna Jeeyar to run schools for poor, tribal, and blind children, offer healthcare and do rehabilitation work after natural disasters.

Chinna Jeeyar’s U.S. trip began March 19 in New Jersey at the Jeeyar Asramam in Cranbury, N.J. He will travel to North Carolina, Georgia, California and his last stop is Boston from where he departs for India March 28, according to the calendar posted on the website jetnewjersey.org.

“He (Chinna Jeeyar) has a lot of support in the U.S. He is asking all devotees to donate one month’s salary to the cause,” Vijaya Allaki, also an advisory board member of JET told News India Times. The temple website shows families in India donating thousands of rupees to the building of the temple.