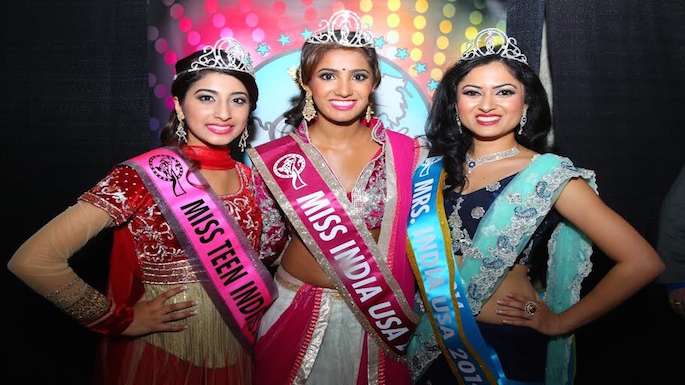 Also Read - Monica Gill, winner of Miss India Worldwide 2014, in a video interview after she won the Miss India USA

In the Miss India USA category, 27 , of Hawaii, were declared first and second runners up respectively among 21 contestants from various parts of the country who participated in the Miss India USA pageant. Nisha Kalamdani of New Jersey and Shivali Marwaha of Virginia, were the other two finalists.

Gangaraju, 19, is majoring in Film Acting and Production. Her hobbies include dancing, singing, writing and swimming. She was crowned by outgoing queen Monica Gill. Pranathy will represent the U.S. in the 24th annual Miss India Worldwide Pageant to be held in Goa, India in June of 2016.

Kaur, 15, who won the Miss Teen India USA title among 15 contestants, aspires to be a doctor and an actress. The first runner up in the category was Karishma Malhotra, 15, of New York and the second runner up was Harika Talluri, 16, of New Hampshire. The other two finalists were Shavi Sikaria of Washington and Nicky Kandola of Virginia.

Dodwadkar, winner of Mrs. India USA, is a senior scientist at Novartis and holds a ph. D. in Pharmaceutical Sciences. Her hobbies include modeling, Latin and Bollywood dancing and teaching. The first runner up in the category was Sheetal Kelkar, 35, of New Hampshire, while Rupal Patel, 25, of New York, was the second runner up.

Rakashi Chand and Tapasya Srivastava, both of Massachusetts, were the other two finalists.

The pageant started with a stunning performance by all the contestants led by the outgoing Miss India World Monica Gill. All contestants presented classical dances, singing performances and gymnastics. Stacy Issac, Miss India USA 2001 and Roshi George, Miss FOKANA, were emcees for the evening.