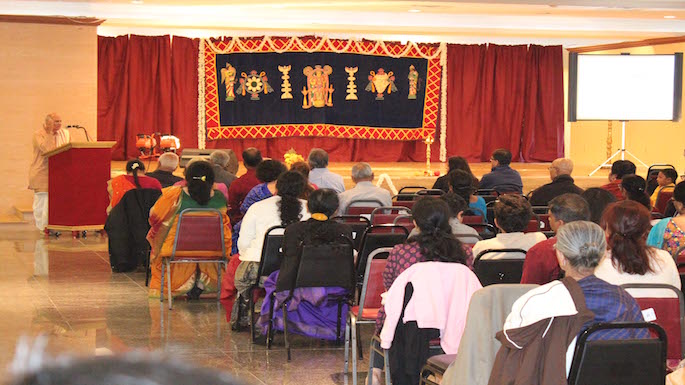 Also Read - Historic Moment! Ireland Gets Its First-Ever Hindu Temple in Dublin After a Wait of 20 Years

MORGANVILLE, New Jersey — The Hindu American Temple and Cultural Center (HATCC) held a fundraising luncheon at the Guruvaayoorappan Temple on Nov. 8 to help the temple expansion project. Prominent members of the community, including Dr. Sudhir M. Parikh, publisher of Desi Talk, and recipient of India’s Padma Shri award and his wife Dr. Sudha Parikh, attended the event and pledged their support to the temple, which is considered one of the largest in the country.

The event aimed to collect $750,000 to support the temple projects which have already been approved by Malboro Township, where the temple is located, a temple flyer announcing the Nov. 8 fundraiser said. However, the exact amount collected at the fundraiser was not disclosed and calls made to temple trustees were not returned by press time. According to the flyer, the estimated cost of the projects is $1.75 million.

Projects in the second phase of construction include a Yagashaala for performing Homas in a traditional manner; a fence around the entire property to enhance safety; an entrance gate for the temple with illuminated signs; a Sharddha Bhavan separate from the temple to perform ancestral rites; a storage structure; and a dining hall.

The temple, built on a 40-acre property was inaugurated in July 2012 and recently celebrated its second anniversary. Lord Guruvaayoorappan is the presiding deity of the temple, also known as Krishnaji Temple. In addition, it houses Ganesha; Balaji with Sridevi and Bhudevi; Siva with Ambika; Subrahmanya with Valli and Devasena; Ayyappa; Satyanarayana; Kannikaparameshwari; Bhadrachalam Rama, Krishna, Durga/Lakshmi/Saraswati, Gayatri, Kalabhairava, Hanuman and Navagrahas. All images are made of granite and are sculptured by traditional artisans in Tamil Nadu.

The lord Ayyppa sanctum has 18-steps similar to those in Sabarimala in Kerala.

The temple hosted a Kalyana Utsavam of this Kalyana Srinivasa by TTD in May 2010, with the participation of 20 officials and others from TTD.

HATCC completed the priest quarters consisting of 12, fully-furnished apartments in 2010. The upper level of the temple houses all the sanctums, while the lower level has a multi-purpose hall, facilities, gift shop and classrooms. Broad magnificent granite steps lead to the temple in the upper level.