A photo exhibit, an open-mic, spoken word poetry and a Bengal tiger in search of the meaning of life, highlighted a day-long series of events at LaGuardia Community College last week, as part of the “Beyond Sacred: Unthinking Muslim Identity” program. 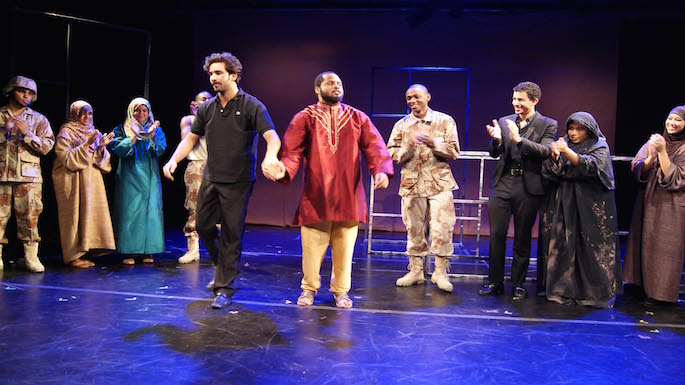 Also Read - Netherlands: Ban on Use of Burqa in Public Places Comes Into Force

NEW YORK—A photo exhibit, an open-mic, spoken word poetry and a Bengal tiger in search of the meaning of life, highlighted a day-long series of events at LaGuardia Community College last week, as part of the “Beyond Sacred: Unthinking Muslim Identity” program. The trio of events organized Nov. 13 by the college as part of its year-long series tailored toward spreading awareness and understanding about Islam in post-9/11 America, included a photography exhibit, the Fringe Verses Open Mic night and a performance of playwright Rajiv Joseph’s Pulitzer Prize winning play “Bengal Tiger at the Baghdad Zoo.” Also Read - Eid-ul-Fitr 2019: Crescent Moon Sighted, President Ram Nath Kovind Extends Greetings to Muslims Around The World

The series, which was launched in September and produced by the LaGuardia Performing Arts Center, includes five themes – “Beyond Sacred,” “Gender Sacred,” “Identity Sacred,” “Performing Sacred,” and “Beyond – Beyond Sacred.” Theatrical performances, music, dance, panel discussions and community forums will focus on each of these themes. Some of the highlights include a dance festival called “Leap of Faith,” and a Berber Film Festival presented by the Tazzla Institute for Cultural Diversity. Also Read - New Zealand Prime Minister Jacinda Ardern Shows Solidarity to Country's Islamic Community After Friday's Attack

The program brings more than 50 performances and community discussions to the LPAC on the college campus for the entire 2014-2015 season, as well as to performance and public spaces throughout New York City. The season will culminate in an interview-based theatre production of the same name by Ping Chong + Company (PCC), under the artistic direction of Ping Chong and Sara Zatz.

“These troubled times demand exactly this type of program,” LaGuardia Community College President Dr. Gail O. Mello, was quoted in a college press release. “Through the arts and dialogue we hope to shatter misconceptions and build deep and long-lasting understanding and connections within our city.”

LPAC Managing Director Steven Hitt describes “Beyond Sacred” as “an exploration of Muslim identity through the lens of music, theatre, and dance that will open a dialogue among Muslim and non-Muslim communities, and will challenge the assumptions of group identity.” The interdisciplinary events are designed to create a cohesive cultural program that illuminates life experiences of self-identified Muslims in today’s New York City.