Will BJP be able to establish their legacy? Or will Congress survive the Modi wave? 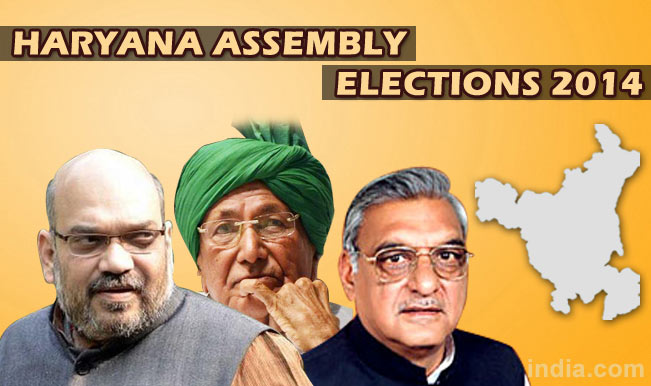 Update 5.30 pm: After crossing the majority, the party is currently leading with 47 seats followed by INLD with 20 seats. Congress won one more seat and now the party has 15 seats. Newest reports say that HJC has 2 seats and Others have 6 while HLP is trailing with no seats. Also Read - Samples of Poultry From 16 Maharashtra Districts Test Positive For Bird Flu | Complete List Here

Update 4.00 pm: The BJP has reached the majority mark as the saffron party reaches the figure of 45 for the very first time and is currently leading on two seats. OP Chautala’s INLD could bag 18 seats and is leading on one seat. The Congress party have won 14 seats as even they are leading on one seat. Others have won 8 seats as the counting of 5 seats are still on. BJP will hold a Parliamentary Board meeting shortly in party headquarters situated in Delhi to discuss the matters of the chief minister candidate in Haryana and government formation in Maharashtra.

Update 3.00 pm: In the Haryana Assembly Elections 2014, the BJP is not too far away from the majority figure. The BJP have won 35 seats so far and remains the single largest party in the state. INLD have been on second position as they have won 16 seats so far and the Congress is lagging on third position with 11 seats. HJC couldn’t make much impact as it won only two seats. In an unexpected poll-battle result, the unpopular face in Sirsa Gopal Kanda, lost his contest in Sirsa constituency after leading initially.

Update 01.20 pm:  Former Chief Minister Bhupinder Singh Hooda also won his seat in Garhi. The trends are in favour of BJP as are leading in 48 seats followed by INLD, who are ahead on 21 seats. However the BJP have won 24 seats where the Congress have won 10 seats. BJP’s Manohar Lal Khattar won from high-profile seat in Karnal with a margin of over 60,000 votes. It seems like the BJP is ready to wrest Haryana from Congress as results are largely anti-Congress.

Update 12.40 pm:  The big upset in Haryana Assembly Results 2014 comes in the form of Savitri Jindal (Congress). One of the richest women in India, Jindal lost inspite leading the race during the poll campaigns. Another upset came from the BJP camp as Sushma Swaraj’s sister Vandana Sharma also lost. Randeep Surjewala of Congress won in the Kaithal constituency, while Vimla Chaudhari of BJP won from the Pataudi seat. Bhupinder Singh Hooda conceded defeat even when the counting is still on. The trends show that BJP is projected to win 48 seats; INLD 21, Congress 14, HJC 2, and Others 5.

The results are however in favour of BJP as the party has won 19 seats of the 32 seats declared. Of the remaining 13 seats, the INLD has won 6 seats, Congress 4 and Others 3.

I extend my wishes to the new Govt to be formed, hope they will work for ppl at the same pace: BS Hooda

Update 12.10 pm: In Haryana Assembly Elections 2014, the final results for 21 constituencies are out and the majority of seats are won by BJP. Of the 21 seats, 14 seats are won by BJP, 3 by INLD, 3 by Congress and 1 seat by Others. The trends continue to favour BJP as the tally reads; BJP 45, INLD 22, Congress 16, Others 5, and HJC 2. It seems the poll-pitch of development by Amit Shah-led BJP have paid off huge dividends.

Update 11.35 am: The 2014 Haryana Assembly Election results in some constituencies are finally out. In the Haryana Assembly Elections 2014, the results for 13 seats are out. Of the 13 constituencies, 11 seats have been won by BJP, and one each by INLD and Congress. However the trends are strongly in favour of BJP as they are ahead on 43 seats. INLD is leading in 22 constituencies; Congress is third on 17 seats and Others are ahead on 8 seats. Anil Vij (BJP) from Ambala Cantt. and Gyan Chand Gupta (BJP) from Panchkula are confirmed winners in Haryana.

Update 11.05 am: Moving in the fourth hour of vote counting, BJP breathes a sigh of relief as they regain lead over one seat and now their tally reads 43. INLD has maintained its second position as they are leading in 22 constituencies. The Bhupinder Singh-led Congress is struck on 17 seats, whereas HJC leads on 2 seats and Others on 6 seats. The Haryana Assembly Elections have its first winner in the favour of BJP as Anil Vij wins from Ambala Cantt.

Update 10.45 am: Call it a setback or just a regular fluctuation, the BJP is spiraling down as the counting progresses in Haryana. BJP was clear on majority, has fell below the majority mark. BJP is leading on 42 seats, whereas Om Prakash Chautala’s INLD has gained a seat more and now leads in 22 constituencies. Congress is on third place as they are ahead in 17 constituencies. Haryana Janhit Congress leads on 3, as Others lead on 6 seats in the state.

Update 10.30 am: In the Haryana Assembly Elections 2014, the BJP has gone below the majority mark for the first time as they now lead on 43 seats. INLD and Congress have maintained their second and third positions respectively. INLD and Congress are giving tough fight to each other as they are leading on 21 and 17 seats respectively. Kuldeep Singh Bishnoi-led HJC is leading on 3 seats whereas others are ahead on 6 seats.

Update 10.00 am: The counting of 2014 State Assembly Elections have entered the third crucial hour. The trends show that BJP will have no problem in forming the government of its own. BJP is the single largest party as they are leading on 47 seats. INLD has maintained its second place as they are leading on 20, whereas the Congress leads on 14 seats. The Other parties in Haryana are currently leading on 3 seats.

Update 9.45 am: The trends in Haryana Assembly Elections 2014 favour the BJP as they have maintained their lead over Congress and INLD. BJP is leading on 52 seats; whereas the INLD is second placed on 15. The Congress maintained its third position while leading on 13 seats while HJC is ahead on a single seat. Looking at the current trends it clearly indicates that the exit poll results were indeed true, as BJP seems to form government on its own.

Update 9.30 am: BJP have gained a slender lead in its tally as far as the trends are concerned. In the 2014 Haryana Assembly Elections, BJP is ahead on 47 seats, while the INLD is steady on second place leading on 20 seats. The Bhupinder Singh Hooda-led Congress is third place leading on 18 seats whereas the HJC is ahead on 4 seats, and Others on 1 seat.

Update 9.15 am:  The second hour of the Haryana Assembly Elections 2014 will be crucial for the BJP in Haryana. The BJP are steadily leading on 44 seats whereas the INLD has maintained its second position leading on 23 seats, whereas the Congress is on third place as they are ahead on 20 seats, Others are leading on 4 seats. Will the BJP maintain its lead or is there any way for Congress to bounce back?

Update 9.00 am:  The first hour in the Haryana Assembly Elections 2014 have been in favour of BJP. The scenario is clear as the BJP is again ahead of  Congress and INLD in Haryana. The BJP is leading on 45 seats, whereas the INLD is on second position as they are ahead on on 22, Congress is leading on 18, whereas the Others are ahead on 5 seats. Will the Congress bounce back or is it BJP all the way?

Update 8.45 am: The trends in the first hour have been dominated by the BJP in 2014 Assembly Elections of Harayana. In the 82 seats on which the trends are out, BJP is leading on 44 seats, INLD on 18 seats, and INC on 15 seats. The ‘Other’ parties are leading on 5 seats.

Update 8.30 am: The first half hour of the poll counting of Harayana State Assembly Elections have belonged to the BJP and Congress is witnessing the expected downfall. The BJP are ahead on 6 six seats, INLD are leading on 3 whereas Congress and INLD are leading on one seat each; it will be interesting to see, where the early trends lead to. Will the Amit Shah-led BJP score big in Haryana or will Congress and INLD spring a surprise?

Update 8.15 am: The first trends in the 2014 Haryana Assembly Elections are out and as expected the Bharatiya Janata Party (BJP) is ahead. The first trends show that the BJP is ahead on one seat. Early setback for Congress, but nothing surprising as the exit polls had already predicted the same outcome.

Update 8.00 am: The counting for 90-seat Haryana Legislative Assembly have finally begun. The first trends are expected to be out soon in next 15 minutes. The exit polls have clearly indicated that the Modi Wave will prevail in Haryana. The BJP is set to top Haryana, with INLD on second position and Congress slipping to third position.

Haryana Assembly Elections 2014 witnessed a record voter turn-out on October 15, when the people of Haryana broke their own records. The voter turn-out was 76%, a significant 4% rise from the 2014 Lok Sabha Elections and 5% up from the 2009 Assembly Elections. With the polling over, exit polls have signalled that Bharatiya Janata Party (BJP) will emerge as the single-largest party. The Indian National Lok Dal (INLD) and Indian National Congress (INC) will be at second and third positions respectively.

Today Chanakya Exit Polls Assembly Results 2014 have predicted that the saffron party will not only be the single largest party, but also will be able to form a government of their own. The poll survey have predicted that BJP would bag 52 ± seats; INLD 23 ± seats; Congress would manage to bag 10 ± seats; whereas other parties would not be able to win more than 5 seats. The poll projection have sent celebratory signals in the BJP; whereas the other parties are sulking that maybe the Chanakya’s forecast gets wrong this time.