High voter turnout was recorded in the 91 constituencies in 14 states and Union Territories which went to polls in the third and substantial phase of Lok Sabha elections, with Chandigarh witnessing the highest percentage of 74. 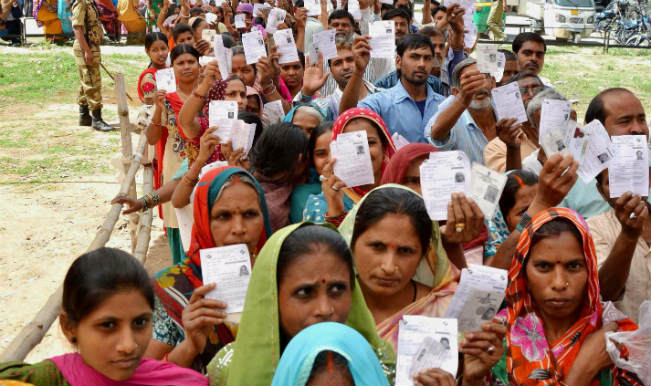 New Delhi, Apr 10: High voter turnout was recorded in the 91 constituencies in 14 states and Union Territories which went to polls in the third and substantial phase of Lok Sabha elections, with Chandigarh witnessing the highest percentage of 74.

The voter turnout this time was substantially higher over the last Lok Sabha elections in all the constituencies.

The 10 seats of Uttar Pradesh, which went to polls today, reported a record turnout of 65 per cent as compared to 51.30 per cent recorded in the last LS polls.

Chandigarh constituency recorded the highest turnout of 74 per cent, against 64 per cent in 2009 polls.

Kerala, which went to polls in single phase today, recorded 73.4 per cent voter turnout, up from 73.2 per cent last time.

Chhattisgarh’s Bastar seat witnessed the lowest voter turnout among the 91 seats of 51.4 per cent. But it was higher as compared to 47.33 per cent recorded in the last LS polls.

EC maintained that the turnout could be “much higher” in all the seats as final reports were yet to come in with voting still on after the stipulated hours in various areas.

In Odisha, maoists snatched EVMs and took away the battery of one voting machine. EC has decided to postpone polling in 22 places in Bihar — 19 in Jamui, two in Nawada and one in Gaya — as polling personnel were not sent there keeping in mind their safety.

The fresh date of polls in these areas will be decided soon.

Jharkhand’s four seats today witnessed 58 per cent turnout, which was higher than the 50.89 per cent recorded in last general elections.

Madhya Pradesh, where nine seats went to polls, saw an average turnout of 54.13 per cent, while in Haryana it was 65 per cent. All the 10 seats of Haryana had a single-phase poll.

In the last elections, the turnout in Haryana was 68 per cent. “The turnout could be 73 per cent in Haryana when we get the final figures,” Deputy EC Alok Shukla said.