FIRs have been filed against DMK President M Karunanidhi and his son and party Treasurer M K Stalin in connection with a clash between their supporters and AIADMK workers. 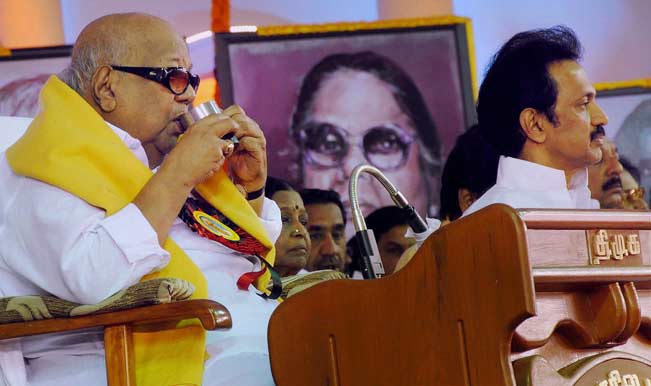 Chennai, Sep 28: FIRs have been filed against DMK President M Karunanidhi and his son and party Treasurer M K Stalin in connection with a clash between their supporters and AIADMK workers in the wake of conviction of Chief Minister Jayalalithaa in the assets case. Three FIRs were filed at the Royapettah Police Station against the two and several others here last night based on complaint by some AIADMK workers who alleged that a group of DMK workers attacked them with ‘deadly weapons’ near Karunanidhi’s Gopalapuram residence here, police said. Also Read - 'OPS For CM' Posters Create Ripples in AIADMK Ahead of 2021 TN Assembly Elections

The FIRs were filed under IPC sections 147 (Punishment for Rioting), 148 (Rioting, armed with deadly weapon), 324 (Voluntarily causing hurt by dangerous weapons or means), 336 (Act endangering life or personal safety of others) and 506/2 (Punishment for criminal intimidation), they said. The clash took place when AIADMK workers protested against DMK and its leaders, alleging that it was their act of ‘foisting’ the illegal Rs 66.65 crore assets case that led to the conviction of Jayalalithaa by a Bangalore special court yesterday. Also Read - Coronavirus in Tamil Nadu: Another DMK MLA Tests Positive, Total 13 Party Legislators Infected Thus Far

AIADMK workers continued to burn effigies of DMK leader Karunanidhi and BJP’s Dr Subramanian Swamy in various parts of Coimbatore district even as shops and trade establishments downed their shutters for the second day today, as a follow up to the violence in the aftermath of judgement sentencing Jayalalithaa for four years imprisonment. Police said effigies were burnt in Irugur, Madukkarai, Mettupalayam and Karumathampatti in the district by the ruling party activists to air their ire against DMK and BJP leaders.

Majority of the shops were closed in major business areas in R S Puram, Gandhipuram, Ukkadam, Madukkarai. Private buses, autorickshaws and taxies were off the roads and only state-owned buses operated services in some parts of the city, as buses to nearby Kerala and Karnataka remained indoors, police said. Nearly 500 party workers squatted in the middle of the road in Sulur and Mettupalayam affecting traffic for some time.