As per the earlier announcement, the CDS will work as a single-point advisor to the Central government on matters related to the military and his role will also include focusing on better synergy between the Indian Army, Indian Air Force and the Indian Navy.

New Delhi: The Central government on Monday night appointed Army Chief General Bipin Rawat as the first Chief of Defence Staff. The honour comes to Rawat just a day before he retires as Chief of Army Staff after completing a full three-year term. He will take over the responsibility on December 31, 2019.

General Rawat becomes the first officer to hold the post which was created just a few days ago. The announcement in this regard was made by Union Minister Prakash Javadekar last week. As per his announcement, the CDS will work as a single-point advisor to the Central government on matters related to the military. His role will also include focusing on better synergy between the Indian Army, Indian Air Force and the Indian Navy.

Defence Ministry: Army Chief General Bipin Rawat has been appointed as the first Chief of Defence Staff of the country. pic.twitter.com/YqakbJrcZY

Defence Ministry: General Bipin Rawat’s tenure will start with effect from 31st December until further orders and extension in his service. https://t.co/xzD0OaWTlM

An alumnus of the St Edward School, Shimla, the National Defence Academy, Khadakwasla, and the Indian Military Academy, Dehradun, General Rawat was appointed as the Chief of Army Staff on December 31, 2016. 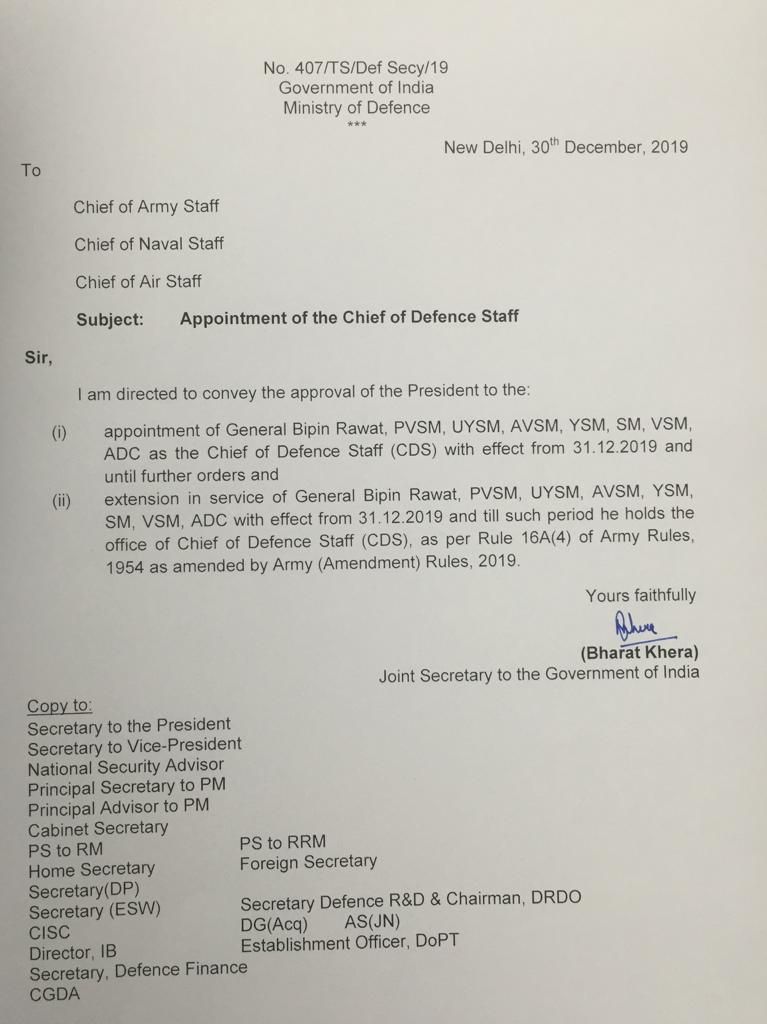 The development comes after Prime Minister Narendra Modi in his August 15 speech at the Ref Fort stated that the country for the first time will have the chief of defence staff. In his speech, he had further stated this would integrate the operations of the three forces, the Indian Army, Indian Air Force and the Indian Navy.

Saying that the Armed Forces were the pride of the country, PM Modi had stated that with changing times, the way of fighting a war has also changed and to address that, there is the need to sharpen the coordination among the forces.

Later, Defence Minister Rajnath Singh had termed the Central government’s move a ‘historic decision’, and said it is a major step towards bringing about proper coordination in the Armed Forces.

He also said that the move from the Centre will pave the way for reforms in the higher defence management in the country.

“In a historic decision for ushering in reforms in the higher defence management in the country, the Government has decided to create a post of Chief of Defence Staff and to create a Department of Military Affairs, within the Ministry of Defence (MoD),” he had said in a series of tweets.