BJP vs AAP: Taking the battle to the social media ahead of Delhi Assembly Elections

Armed with state-of-the-art laptops, computers and high-speed internet connections, a team of a dozen young IT professionals supported by hundreds of volunteers on the ground are heading the BJP's 'war room'. 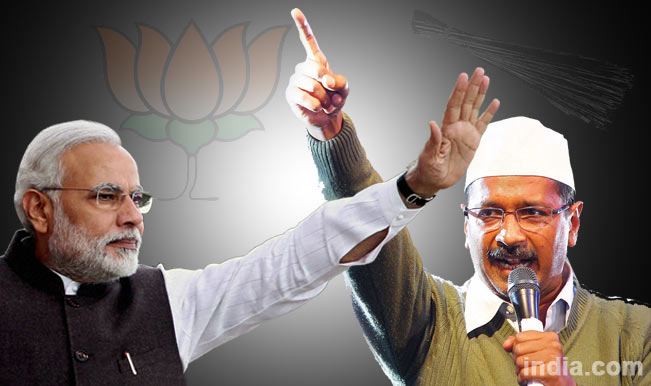 New Delhi, Dec 27: Armed with state-of-the-art laptops, computers and high-speed internet connections, a team of a dozen young IT professionals supported by hundreds of volunteers on the ground are heading the BJP’s ‘war room’ for the Delhi assembly polls and working round-the-clock to counter their arch rivals – the AAP. Set up at the Delhi BJP headquarters at 14, Pandit Pant Marg earlier this month, the war room has professionals, some of whom work part-time or have taken a sabbatical from their jobs, to critically analyse posts, comments and tweets on Facebook and Twitter that talk about the Bharatiya Janata Party (BJP), its policies or leaders. Also Read - Coronavirus in Delhi: Kejriwal Govt Revises Discharge Policy; Here's All You Need to Know

According to Sumeet Bhasin, who heads the BJP’s Information Technology (IT) cell under which the war room has been set up, the party’s top leadership has specifically asked the team to be “aggressive” on the social media. “War rooms are set up before every election but this time we have intensified our efforts and the results are showing. We were not this active earlier,” Bhasin told IANS adding that Prime Minister Narendra Modi’s liking for technology and social media acted as a major push. Also Read - Navjot Singh Sidhu in AAP? 'He's Welcome,' Says Delhi CM Arvind Kejriwal

According to him, the number of members of the party’s Facebook page rose from around 11 lakh to over 13 lakh in just four weeks. In addition, the page has registered their supremacy in terms of engagement and reach in Delhi, much ahead of the Aam Aadmi Party (AAP). “On an average the BJP posts on Facebook are getting over 10,000 likes while the posts from AAP are liked by around 5,000 people,” he said.

Bhasin credits the achievement to his team of youngsters, who not only analyse Facebook posts and tweets, but also scout for potential volunteers. “We scan all the comments on the posts that we make. Those who have something thoughtful to add or come with their own ideas to promote the party and its policies are then contacted by our team,” said one of the team members.

At present, the party has over hundred volunteers in Delhi who cover 52 of the 70 assembly seats. The number is likely to rise to around 500 by the time Delhi goes for polls, Bhasin said. “The job of the volunteers is to spread the party’s message to the masses and help shape their opinions in our favour,” he said though quickly clarified that none of the professionals or volunteers were being paid.

And having conquered Facebook, the team has now their eyes set on Twitter and WhatsApp. “Facebook is our base and all other mediums like WhatsApp, Twitter, E-mail, SMS etc. are like distribution channels. But having said that, we will start a similar aggressive campaign on Twitter starting next week and few weeks before the polling takes place WhatsApp will also be used to reach out to the people,” said Bhasin.

The party is already using WhatsApp to connect over 15,000 party members through 250 groups in Delhi with the top leadership wherein the members can interact with each other and their leaders.