Attacking AAP for seeking a 'fatwa' in its favour and then rejecting it, BJP today accused the party of doing communal politics and said it stood exposed for attempting to polarise votes ahead of Delhi elections. 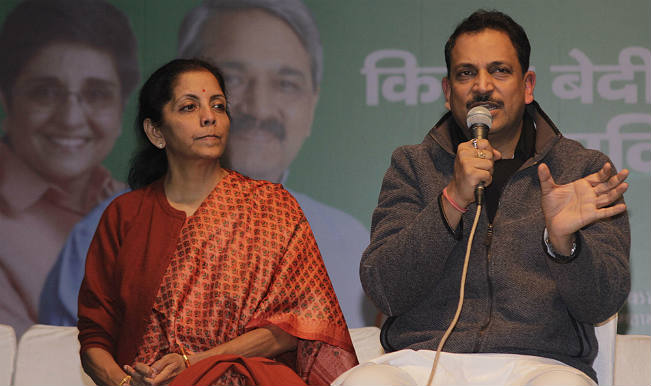 New Delhi, Feb 6: Attacking AAP for seeking a ‘fatwa’ in its favour and then rejecting it, BJP today accused the party of doing communal politics and said it stood exposed for attempting to polarise votes ahead of Delhi elections. BJP said the ‘fatwa’ by Shahi Imam of Jama Masjid Syed Ahmed Bukhari appealing Muslims to vote for AAP earlier in the day was an insult to the majority and asked all those opposed to it, to come out and vote against those who sought the religious pronouncement. Also Read - Delhi Pollution Update: Govt Bans Construction Work, Entry of Trucks till This Date

“Aam Aadmi Party stands exposed for doing communal politics. They are completely rattled and that is why they are attempting to polarise votes on communal lines,” Union Minister Nirmala Sitharaman said. She accused AAP of being habitual to such politics, saying that “they first ask for some (support) and then reject it saying they did not ask for it”. Asked about the ‘fatwa’, Finance Minister Arun Jaitley said, “Such fatwas have been issued earlier too. Such a fatwa was also issued in Gujarat too in the past. Those who are against such fatwas should come out to vote 100 per cent.” Also Read - Tripura Election Result: Ruling BJP Sweeps Tripura Civic Polls; Wins All 51 Seats of Agartala Municipal Corporation

BJP national secretary Shrikant Sharma said “this is an insult to the majority population who believe in the unity and integrity of the country and support the politics of good governance and development. They will reject such politics.” Party spokesperson M J Akbar said, “AAP has shrunk to extraordinary depths. It is using both alcohol and fatwa. But they don’t realise that the Delhi and Indian voter is not communal. Any appeal on communal lines becomes counter-productive.” Sitharaman said AAP is resorting to all kinds of measures to win Delhi polls and form its government, but Delhi people can see through their motives and not accept their politics.

In her attack, she cited examples of AAP taking Congress support to form the last government in Delhi, accepting funds from ‘dubious’ companies without verifying its antecedents and now, for first asking for a ‘fatwa’ in their favour to polarise votes and then rejecting the same. The Minister said Congress president Sonia Gandhi had asked for a fatwa earlier and she had got it, the same away AAP has also asked for it from Bukhari. To a question on AAP alleging links to the BJP press conference soon after the issue of ‘fatwa’, Sitharaman said it is a “very interesting distortion” that the party is resorting to, saying the beneficiary of the ‘fatwa’ is Aam Aadmi Party.

Citing “grave threat” to the community from communal forces, Bukhari today appealed to Muslims to vote for AAP but the party rejected the support saying it was against any type of caste and communal politics. Sitharaman said that it has been confirmed by the Imam himself that the fatwa was issued on the request of AAP leaders, including Alka Lamba. “In this election, AAP has adopted every dirty trick to capture power in Delhi. They have given tickets to people who are associated with terrorists and anti-national forces,” she said, citing examples of Amanatullah Khan contesting from Okhla who has openly supported Zia-ur-Rehman, an accused in Delhi and Ahmedabad bomb blasts. “It has been a trait of AAP’s politics, perhaps a cultivated habit, to seek, receive and then to pretentiously reject,” she said in a statement.