On Tuesday, traffic went haywire on national capital roads as the tractor parade taken out by farmers spilled into many parts of the city and reached Central Delhi's ITO and Red Fort areas despite police raising barricades and checkpoints at multiple places.

New Delhi: In wake of Tuesday’s violence in the national capital after police and farmers involved in clashes at many places during the farmers’ tractor rally, Delhi Traffic Police on Wednesday issued a fresh advisory to inform commuters about route diversion and which routes should be avoided.Also Read - Fire Breaks Out in Footwear Factory in Delhi's Narela; Firefighting Operation Underway

Traffic is heavy in the routes as 2-2 lanes to and fro from Kalindi Kunj to Noida have been closed. The route from Minto Road to Connaught Place has also been closed, please avoid using this route, the DTP added. Also Read - Pre-pone Summer Vacations: Delhi Parents Association Demand Amid Sweltering Heatwave 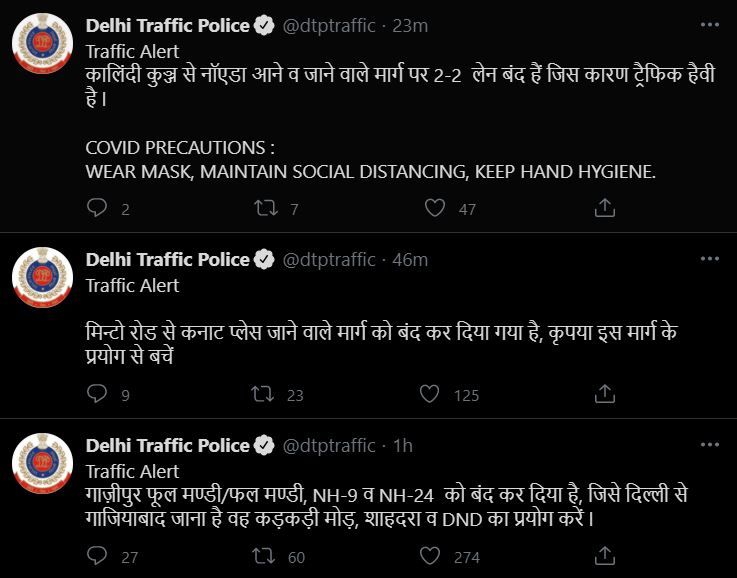 Earlier in the day, Delhi Police has announced that nearly 22 has been filed in connection with the violence during farmers’ tractor rally on the occasion of India’s 72nd Republic Day on Tuesday.

On Tuesday, traffic went haywire on national capital roads as the tractor parade taken out by farmers spilled into many parts of the city and reached Central Delhi’s ITO and Red Fort areas despite police raising barricades and checkpoints at multiple places.

Wielding sticks and clubs and holding the tricolour and union flags, tens of thousands of farmers atop tractors broke barriers, clashed with police and entered Delhi from various points to lay siege to the Red Fort and climb the flagpole on Republic Day.

The traffic on the city roads, though thin due to the Republic Day holiday, was thrown completely out of gear with hordes of protesting farmers deviating from the pre-designed rally routes and driving their tractors towards Delhi from Singhu, Tikri, Ghazipur and other border points.

However, the traffic on most roads in the national capital was restored by around 9 pm, according to the Delhi Traffic Police.