Left parties today said that the incident was a reflection of the growing intolerance of divisive communal forces to freedom of expression and called for such "inhuman and anti-democratic moves" to be defeated. 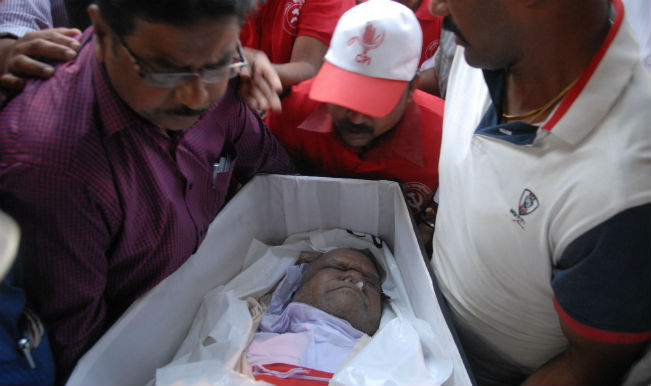 New Delhi, Feb 21: Seething over the murderous attack on veteran CPI leader Govind Pansare, Left parties today said that the incident was a reflection of the growing intolerance of divisive communal forces to freedom of expression and called for such “inhuman and anti-democratic moves” to be defeated. Strongly condemning the attack on the prominent anti-toll tax protester, who succumbed to his injuries in Mumbai last night, six Left parties also charged that the Maharashtra government’s failure to arrest the culprits reflected “utter inaction”.

“The lethal attack on Comrades Govind Pansare and Uma Pansare reflects the growing intolerance of the divisive communal forces against freedom of expression. “We appeal to all Left and democratic forces to rise against such onslaughts and defeat such inhuman and anti- democratic moves,” the six parties — CPI, CPI(M), Forward Bloc, CPI-ML-Liberation, Revolutionary Socialist Party and Socialist Unity Centre of India (Communist) — said in their joint statement.

Urging the Maharashtra government to take “effective” action and arrest the culprits, the Left parties also called upon their respective party units to organise protests across the country over the attack on Pansare. Pansare was shot at along with his wife by unknown assailants in Kolhapur on February 16 while they were taking a morning walk. His mortal remains were flown to Kolhapur on a chartered plane for the last rites. “Despite widespread condemnation, Maharashtra government has so far failed to arrest the killers, suspected to be communal and reactionary elements. It shows utter inaction of the state government,” the Left parties said.

The Left parties said that the attack of Pansare “reminds” of the killing of Narendra Dabaholkar in 2013 in Pune as the same modus operandi was followed there. Pansare was a prominent communist theoretician and leader who always led struggles for the exploited and socially oppressed people from the front line, the Left parties said. CPI had earlier said that it would carry on the struggle for which Pansare laid down his life and also appealed to all state units to organise mass meetings in his honour and take up the unfinished tasks.

The party also said that extremist right-wing forces cannot succeed through such actions and vowed to carry forward the struggle taken up by Pansare, who was leading an anti-road toll agitation.