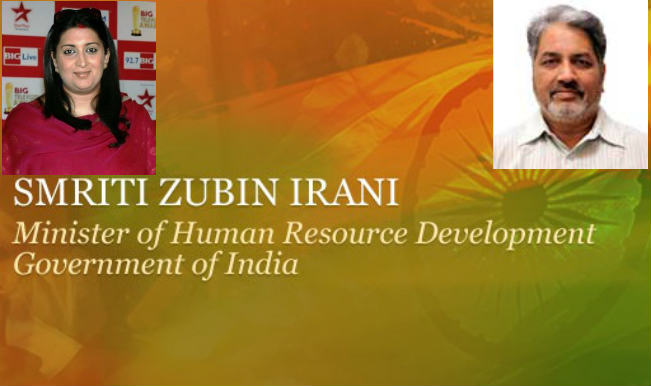 Also Read - Will Make Water Supply in Delhi as Good as in Developed Countries: CM Kejriwal

New Delhi, Dec 29: With the resignation of IIT Delhi Director kicking up a row, government today said it has set up a committee to look into the legality of an MoU signed with Mauritius during his tenure for setting up a campus there even as the IIT said the pact had approvals from the government. HRD Ministry officials maintained that there was no pressure on R Shevgaonkar to resign as IIT Delhi Director and that his resignation has not yet been accepted. Also Read - Manish Sisodia's Health Update: Diagnosed With Dengue & COVID, Delhi Deputy CM Gets Plasma Therapy

The officials said a one-man inquiry has been set up about one and a half months back to inquire into legality of the MoU with Mauritius when the Ministry came across the MoU as it “violated the IIT Act”. Meanwhile, IIT Delhi tonight issued a statement saying that the Director had resigned because of “personal reasons” and it was “not connected to any other matter being reported in the press”. Certain media reports had said that Shevgaonkar was under pressure to approve a proposal for a cricket academy in the IIT campus and to clear the dues of Rs 70 lakh to former IIT professor and now BJP leader Subramanian Swamy. Also Read - Delhi Deputy CM Manish Sisodia, COVID-19 Positive, Also Diagnosed With Dengue After Being Hospitalised For Fever

The IIT statement issued by the acting registrar said the campus in Mauritius is not an “extension campus of IIT-D” but an independent research academy named ‘International Institute of Technology Research Academy’ (IITRA). “IIT-D’s role is only advisory in nature,” it said. It said the original proposal to start International Institute of Technology Delhi Research Academy was initiated on the recommendation of the IIT Council on January 21, 2011 but its nomenclature was later changed to IITRA on the advice of the HRD Ministry.

“The final MoU was okayed by HRD Ministry and it was signed in the presence of the then HRD Minister on November 19, 2013 in Mauritius,” the IIT statement said.According to the MoU, the IIT Senate approval and the approval of the steering committee of IITRA, IIT Delhi was to admit students for IITRA as per norms of IIT Delhi and award all degrees on successful completion of the academic programme (research only) by all students registered by IIT Delhi till 2018, the IIT statement said. The maximum number of students was 50.

In 2004, the HRD Ministry had given certain relaxations to the IITs and Central Universities to enter into MoU’s with institutes abroad for research collaboration but it did not extend beyond that, according to ministry officials. The IIT Council had decided to grant “in-principle” approval to set up an institute in Mauritius with the help of IIT. Citing exchange of letters between the Ministries of HRD and External Affairs, the statement said letters of support were received from the then HRD Minister to the Minister of Tertiary Education, Science in Mauritius on March 21, 2011 and from under secretary to the joint secretary in the HRD Ministry on June 15, 2011.

Shevgaonkar had resigned over the weekend citing “personal reasons” but media report suggested he was under pressure from the HRD Ministry. BJP leader and former IIT-D alumni Subramanium Swamy, whose name has been dragged into the controversy, had yesterday alleged his resignation was not over the alleged demand by him to the Ministry to settle his dues but had to do with setting up IIT-D campus in Mauritius over which an “explanation’ has been sought from him. Meanwhile, IIT Delhi Alumni Association today came out in support of Shevgaonkar, requesting him to continue in his post In a resolution adopted, it also cautioned the Ministry against interfering in the autonomy of the IIT system to enable it to function “smoothly”.

“It is further resolved that IIT Delhi Alumni Assocation is fully behind the Director and request him to continue leading this illustrious institution to greater heights,” it said. Secretary of the association C K Jain felt the Director could be under some kind of pressure but could reveal much except what he had read in media. He though, acknowledged the fact there was some “systamatic fault” in signing the MoU with Mauritius.