JNU sets up proctorial committee to probe clashes between students’ bodies; Is it a repeat of Rohit Vemula’s case?

With the latest tinkering into the so called 'Anti-national' vs 'Freedom of Speech' debate, everyone is suspicious on what will happen next

New Delhi, Feb 10: After a certain group of students from the political university of the country — Jawaharlal Nehru University (JNU) — called for a cultural evening on Tuesday to commemorate the judicial hanging of Afzal Guru and had a clash with ABVP members, the varsity administration has called for a proctorial committee to probe the case on Wednesday. Also Read - Kept Under Solitary Confinement, Not Allowed to Step Out of Jail Cell: Umar Khalid Informs Court

By calling the students anti-national and interrupting the proceeding of the documentary on ‘Afzal Guru’, the young brigade of the saffron wing of the ruling Bharatiya Janata Party (BJP) protested against the students and made a ruckus last night, calling them ‘Anti-National’. Soon the students united on Wednesday morning and walked from Sabarmati Hostel to Ganga Dhaba against the curb on freedom of speech. Instead of letting the march end peacefully, the ABVP members had a verbal collision with the agitating students and one even allegedly assaulted a girl physically.  (ALSO READ: ABVP protest over Afzal Guru’s commemoration in JNU; students seek freedom of expression) Also Read - #IStandWithMasratZahra: Outrage on Twitter After Kashmir Journalist Charged for 'Anti-National' FB Posts 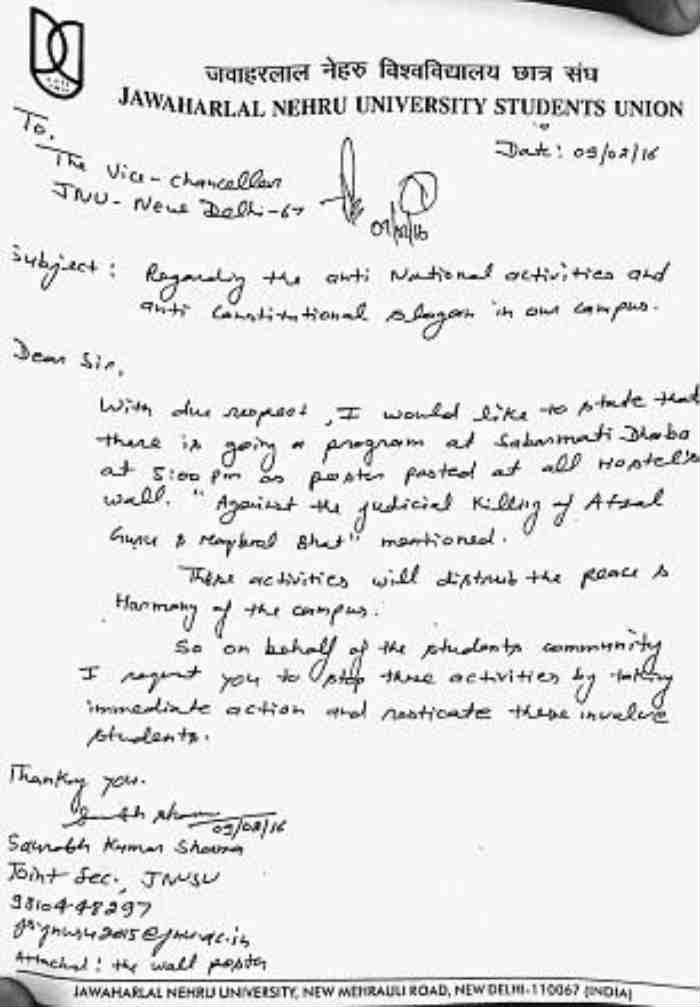 Reacting on the whole incident, the Vice Chancellor M Jagdish Kumar said that they have set up a ‘Proctorial Committee to probe the whole matter and soon a letter will be sent to the students, based on which appropriate action will be taken, He said, “A proctorial committee who will look into this and take view. We can’t give you a time frame as the committee will look into the matter and decide what to do.” (ALSO READ: Dalit student Rohith Vemula death: Politics over suicide or suicide because of politics?)

As the matter has similarity with University of Hyderabad’s Dalit scholar Rohit Vemula, who committed suicide after going through a lot of trauma and suffering, things will certainly take a longer route this time. Rohith protested against the judicial hanging of Yakub Memon in August 2015 and was called anti-national by same ABVP activists. Soon after it, the process of exchanging letters took place between the Union Minister Bandaru Duttatreya, MHRD and the HCU administration. which led to the suspension and social boycott of Vemula. (ALSO READ: Rohith Vemula suicide follows political circus: Why only Dalits, OBCs, Muslims entitled to ‘secular’ sympathy?)

As the matter turned ugly over the couple of months, Vemula could not bear the shame and committed suicide. What happened after that, we all know. Now, with the latest tinkering into the so called ‘Anti-national’ vs ‘Freedom of Speech’ debate, everyone is suspicious on what will happen next. MHRD, this time, might not interfere as it had learnt its lessons hard way. So, how far this protest and agitation and ‘revolt — as called some students — will go, it is the time that will tell. Till that time we all are waiting and probably we will get some answers soon.

This was the poster released by the students who wanted to organise a cultural evening named “The Country Without a Post Office”.