A PCI-appointed panel looking into the journalists assault issue outside 'godman' Rampal's ashram has observed that Haryana Police employed "unconstitutional" tactics to prevent media from doing its duty and recommended investigation by administrative officers into the episode. 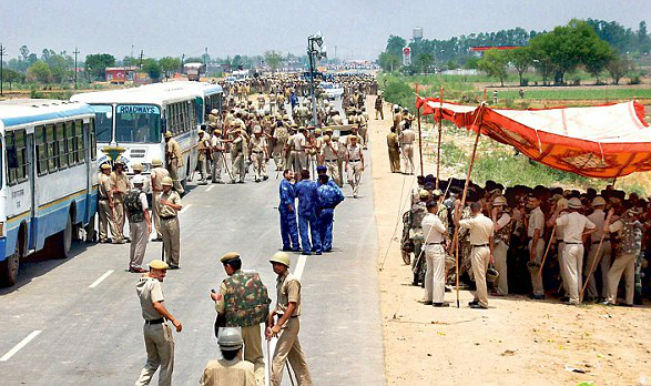 New Delhi, Nov 30: A PCI-appointed panel looking into the journalists assault issue outside ‘godman’ Rampal‘s ashram has observed that Haryana Police employed “unconstitutional” tactics to prevent media from doing its duty and recommended investigation by administrative officers into the episode. In its report submitted to PCI, the four-member committee is learnt to have said that police and local administration failed to rise to the situation and resorted to “brute force” against media persons doing their duty. Also Read - ECB Terminates Players' Contracts For The Hundred

“This showed lack of training and discipline, and a complete disregard to human rights,” the committee said. Several media personnel were among those injured on November 18 as clashes erupted at Rampal’s ashram in Barwala in Hisar district with police lobbing teargas shells and using batons to disperse his supporters. The PCI had set up the committee comprising Sondeep Shankar (Convenor) and Kosuri Amarnath, Rajeev Ranjan Nag and Krishna Prasad (all members) to probe the incident. Also Read - Zee Digital Witnesses Remarkable Growth, Ranks 3rd on ComScore In January 2020 In News & Information Category

In its recommendations, the committee has sought investigation by administrative officers in to the incident and compensation for injured media persons as well as for those whose equipment was damaged during the incident. It also sought identification and suspension of the policemen responsible for the attack on media persons and fast tracking their cases. The panel also said that false cases foisted on media persons should be withdrawn immediately.

The panel observed that TV channels were airing disturbing visuals of people injured in the police action being dragged out of the operational area by policemen in a most inhuman manner. “Haryana Police employed unconstitutional and inhuman tactics to prevent the media from discharging its duties,” the panel added. The committee said the assault on media personnel and equipment amounts to a “prima facie violation of fundamental freedom guaranteed to the media under Article 19 (1)(a) of the Constitution”.

After speaking to media persons who were on the spot in Hisar, the panel noted that it appeared that it was a very well coordinated and well-timed attack on media persons.

The report said that it took just 30 minutes for police to clear the operational area of media persons and it appears they did not want journalists to witness the operation, especially the action of water cannon and baton charge on women and children who were being used as ‘human shield’ by ashram authorities. It also referred to DGP Haryana S N Vashisht’s comment that he deeply regretted the manhandling of the media because it robbed Haryana Police of its share of glory after “one of the most professionally conducted operations” in India, in which not a single bullet was fired.

According to the committee, the DGP also said that a departmental inquiry would be conducted and if anyone is found to be guilty, they would be punished. Chief Minister of Haryana Manohar Lal Khattar told the panel that he would await the departmental inquiry before pronouncing the verdict but reassured that his government was sensitive to the concerns of the media.