Price of RT-PCR Test in Delhi reduced to Rs. 800 in private labs. These tests are being conducted free of cost in government hospitals. But, people had to spend Rs 2,400 for the RT-PCR test at private labs.

New Delhi: The Delhi government on Monday capped the price of RT-PCR test by private labs in the national capital at Rs 800. This announcement was made soon after Chief Minister Arvind Kejriwal directed officials to reduce the rates of RT-PCR tests in an effort to help those who want their tests done in private labs.Also Read - Delhi Witnesses Dip in Covid Numbers, Registers 377 Fresh Cases; Positivity Rate Stands at 4.97 Per Cent

These tests are being conducted free of cost in government hospitals. But, people had to spend Rs 2,400 for the RT-PCR test at private laboratories. Also Read - Delhi: Water Supply In National Capital to Remain Disruptive from Tomorrow | Details Here

Issuing the directive, CM Kejriwal tweeted, “I have directed that the rates of RT PCR tests be reduced in Delhi. Whereas tests are being conducted free of cost in govt establishments, however this will help those who get their tests done in pvt labs.” 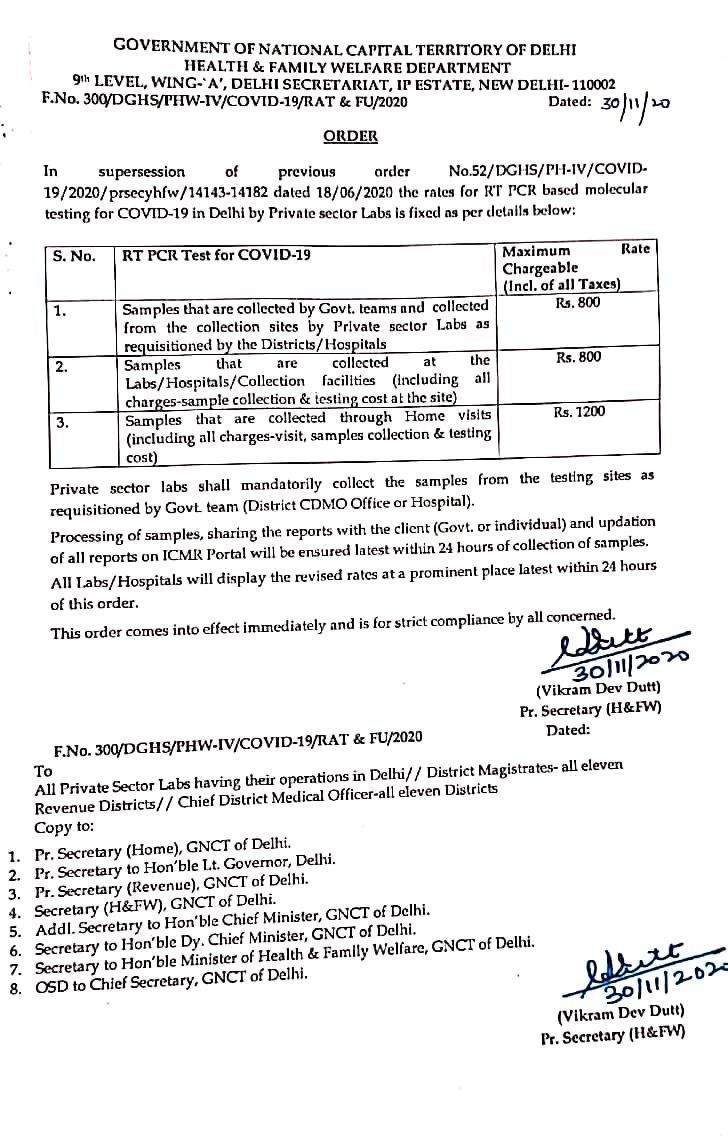 RT-PCR and Rapid Antigen Test are two types of tests done to detect novel coronavirus. Both tests are done free at government testing centres and hospitals, but not at private clinics or hospitals. Currently, people have to spend Rs 2,400 for the RT-PCR test at private labs.

Earlier last week, the Supreme Court sought a response from the Centre on a petition seeking a direction to the Centre and the state governments to fix the maximum rate for the RT-PCR (real-time reverse transcription polymerase chain reaction) test to Rs 400 uniformly across the country, instead of Rs 900 to Rs 2800 as fixed by different state governments, Union Territories and NCT of Delhi. The petition filed by advocate Ajay Agrawal said, “There is a big loot by laboratories and they are minting money to the tune of crores and crores of rupees. The margin of profit is so high as it is as high as 1400 per cent in Andhra Pradesh and 1200 per cent in Delhi.”

Delhi has reported 1,487 new COVID cases in the last 24 hours, taking the total number of coronavirus cases to 35,091 on Monday, according to Union Ministry of Health and Family Welfare.