Less than 24 hours before Delhi goes to poll again on February 7, the Aam Aadmi Party (AAP) has got a ‘pseudo-secular’ boost ahead of the ‘Judgement Day’. 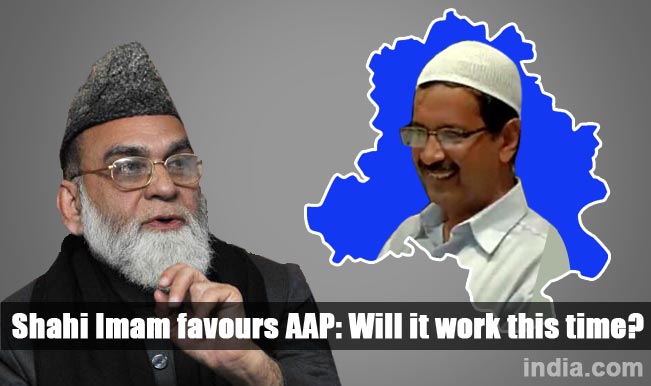 Less than 24 hours before Delhi goes to poll again on February 7, the Aam Aadmi Party (AAP) has got a ‘pseudo-secular’ boost ahead of the ‘Judgement Day’. Shahi Imam Syed Ahmed Bukhari of Jama Masjid in Delhi issued a fatwa asking people of Muslim community to lend their support to Arvind Kejriwal-led AAP in the forthcoming elections. A day after campaigning ended in Delhi Assembly Elections, this gesture by Shahi Imam is surely going to pile up a heap of questions on AAP’s credibility. Imam not only asked to support AAP on February 7, in a veiled attack he also said that people will have to regret if AAP party is not voted to power. Also Read - Delhi Schools Closed Once Again Due To Pollution Till Further Notice

AAP in their press conferences rejected Shahi Imam’s support not once but twice, but the damage has been done. Call it a work of dirty tricks department of AAP or Imam’s call of faith, the elections to be held in less than 24 hours are painted with communal colour. It is now for the Muslim electorate of Delhi to either overlook the fatwa and vote for whichever party they were voting or fall in line with Imam’s diktat and vote for AAP. (Also Read: Delhi Assembly Elections 2015: Top 8 facts about Iron Lady vs I-Run Man in race for Chief Minister’s post in Delhi) Also Read - 'Why Are Children Going To School And Adults Working From Home?': SC Chides Delhi Govt on Pollution

Even in the past, there have been instances where politicians from different political parties have yearned for favours from religious preachers. Politics and religion is something which is inseparable in India. In the 66 years after its Independence, India hasn’t seen an election where castes or religions haven’t played a major factor. (Also Read: Delhi Assembly Elections Opinion Poll Results 2015: Arvind Kejriwal wins chief ministerial race; AAP-BJP neck-to-neck)

Recently, in the 2014 Lok Sabha Elections, Shahi Imam had lent its support to Congress party. Congress President Sonia Gandhi’s controversial meet with Shahi Imam triggered a series of controversies which landed Congress party in a soup. The elections which were fought on developmental agenda saw it taking a communal turn. Call it a fate or whatever, the Congress failed miserably in the elections and hadn’t have revived till date. (Also Read: Delhi Assembly Elections 2015: BJP to form government with 45 seats, AAP to get second place, shows survey result)

Will Imam’s fatwa work in favour of AAP or not, it is for the electorate of Delhi to tell. Delhi goes to poll on February 7 and the counting of votes will be taken up on February 10.