The Times of India challenges Hindustan Times’ claim of being No.1 in Delhi-NCR

TOI’s challenges to prove their superiority in circulation and being the leading newspaper in Delhi-NCR. 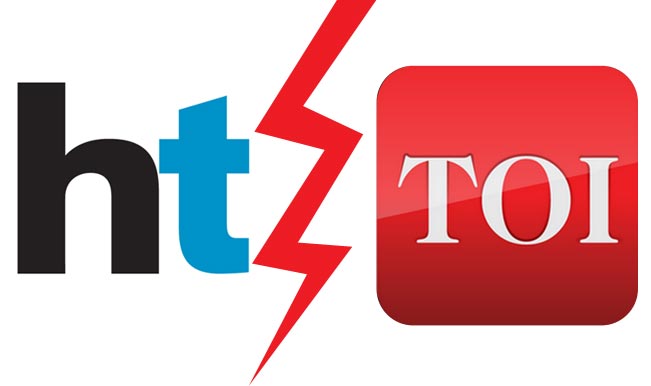 Also Read - Times Group to Shut Down Pune Mirror, Mumbai Mirror To Be Relaunched as Weekly

We’ve been hearing time and again about the war between The Times of India (TOI) and Hindustan Times (HT) on copying each other’s articles or other battles between the newpaper giants. Now, TOI has come up with a different claim, accompanied with a lot of figures, stating that once again they are the leading newspaper of the country. Also Read - Uniphore Software Systems hosted conversational AI Leadership Summit 2018

The recent war began after the Audit Bureau of Circulation’s report (July-Dec 2013) said that the circulation of Hindustan Times in Delhi-NCR is more than that of The Times of India. So TOI after their research have come up with a detailed analysis of how Hindustan Times’ supplement beat TOI in Delhi-NCR and not the main broadsheet. Also Read - Individual cannot be bereft of constitutional morality: ex-CJI Dipak Misra

In their research, TOI has come up with the conclusion that it is the mini version of HT, called HT  2 Minutes which emerged as the culprit. The supplement which is a rehash of the main paper is provided along with Hindi Hindutan from Monday to Saturday, the Hindi newspaper that accounted to the 26 per cent of the circulations. HT 2 Minutes, which is about 12 pages  is priced at just Rs 1.25 against Rs 4.50 for the regular HT. Otherwise, The Times of India states that in terms of regular editions, TOI leads HT BY 38% in Delhi-NCR.

They also slam HT’s Indian Readership Survey (IRS) figures which say that at least 10 people read one copy of their newspaper. TOI states that with the concept of joint family diminishing it is difficult to believe the readership numbers.

Also advertisers are not guaranteed to get their ads published for the ad rate they pay for the combined circulation in the main papers plus the mini version. Futher TOI offers a challenge saying that anyone who wants to know which of the papers is soldout more can call them up or check out in any newspaper store to find that for every five TOI newspapers, only 1 HT is sold.

In 2013, a similar war had broke out between The Hindu and Hindustan Times. Hindu had brought out a series of ads of which the print ads indirectly poked at TOI while their TV ads had taken a dig at them.

Read: Times of India vs Hindustan Times: TOI’s challenge to prove their superiority in circulation