Hyundai has just come out with the 2018 Ioniq lineup at the Auto Expo. We look at the electric sedan here.

South Korean automaker Hyundai has come out with quite a lineup this Auto Expo 2018. In fact, this edition of the expo seems to be one for South Koreans, what with Kia coming into the picture. But that is a story for another day. Today and in this story, we are zeroing in on the 2018 Ioniq electric sedan. While the Kona electric SUV was nowhere to be seen, this was one of the selected electric models that Hyundai showcased at the Auto Expo, which says quite a bit about how much automakers are focusing on the electric vehicle segment.Also Read - Tata Nexon EV Max Launched at Rs 17.74 Lakh: Check Specifications, Range And Other Features

The Ioniq, in its electric and hybrid forms, isn’t a new model by any measure. It has been in international markets for quite a while. Hyundai might be hoping to figure out its chances with the Ioniq in India by measuring the reaction to the model at the Auto Expo. But for the time being, the Ioniq will be presented as a glimpse into what Hyundai can do and offer in terms of electric mobility. With a lot of automakers, including India’s very own homegrown Maruti Suzuki, showing keen interest in the electric vehicle sector, we think that there will be a lot of movement in the space in the coming years. ALSO READ: Auto Expo 2018: Maruti Swift 2018 Launched; Price in India Starts From INR 4.99 Lakh Also Read - Kia Announces Entry into India's EV Market with EV6; Bookings to Begin Next Month

But let’s get back to the Ioniq and its underpinnings. Powering the electric sedan is a lithium-ion polymer battery rated at 28 kWh. All that power goes to an electric motor rated at an equivalent of 118 bhp of power and 295 Nm of torque. The Ioniq comes with front-wheel drive, and it go on a burst of 200 km on a single full charge. Interestingly, the battery also gets fast-charging capability, along with regenerative charging, which charges the battery bit by bit whenever the car brakes. Also Read - Delhi Plans To Roll Out EMI Facility On Electric Two-Wheelers For Govt Employees 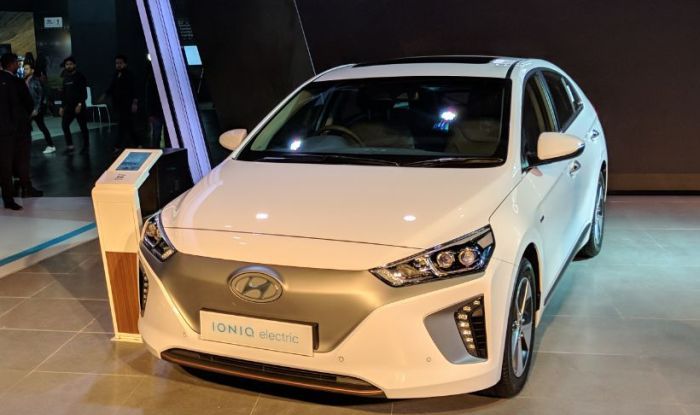 In terms of the exterior, the Ioniq is similar in size to the Hyundai Elantra, with generic lines and a plain but neat and clean design. In terms of pricing, expect the Ioniq to come at a premium over the Elantra, if it does come at all. The new batteries will cost a quite bit, and the Ioniq would likely take you back around INR 20 lakh if it did come to India. But for now, Hyundai is going to wait and see how Auto Expo receives its car. NOW READ: Auto Expo 2018: New Honda Amaze 2018 Officially Unveiled in India; Launch Date, Specs, Images, Features

While the Ioniq is being considered, Hyundai has already said that it will launch its first electric car in India in 2019, as stated by Hyundai India CEO YK Koo. The likely candidate of choice is going to be the Kona Electric, which will be showcased in its production version avatar at the upcoming Geneva Motor Show in March. The Kona may come to India through the CKD (completely knocked down) route, which means that it will come at a premium anyway. The Hyundai Chennai factory will assemble the Kona, based on the estimated plan.