In his Facebook post, Misra alleged that he was poisoned with deadly arsenic trioxide on May 23, 2017, during a promotion interview at ISRO headquarters in Bengaluru.

New Delhi: A senior scientist of the Indian Space Research Organisation (ISRO) on Tuesday claimed that he was poisoned with the deadly Arsenic Trioxide in 2017. The scientist, Tapan Misra made this claim in his Facebook post. However, he has also said that he has no idea how and why he was ‘at the receiving end of such mystery’.Also Read - ‘Hot Jupiter’ Exoplanet 1.5 Times The Mass of Sun Discovered by Indian Scientists. Know More Here

In his Facebook post, Misra alleged that he was poisoned with deadly arsenic trioxide on May 23, 2017, during a promotion interview at ISRO headquarters in Bengaluru. Also Read - ‘One Sun, One World & One Grid’ Will Enhance Viability Of Solar Projects For All Countries: PM Modi at COP26

Misra who is presently working as Senior Advisor at ISRO and is superannuating at the end of this month, wrote in his post, “Fatal dose was probably mixed” with chutney along with Dosa, in snacks after lunch.” Also Read - How Michiyo Tsujimura's Discovery Of Vitamin C in Green Tea Helped Popularise It As Health Drink

In a Facebook post titled ”Long Kept Secret”, Misra further claimed that in July 2017, Home Affairs security personnel met him and alerted him of arsenic poisoning and helped doctors to focus on exact remedy.

Misra also claimed that he later suffered from health issues including severe breathing difficulty, unusual skin eruptions, skin shedding and fungal infections. Along with his post, he also added images of his medical report on the social media platform to claim he has been diagnosed with Arsenic toxication by the AIIMS, New Delhi. 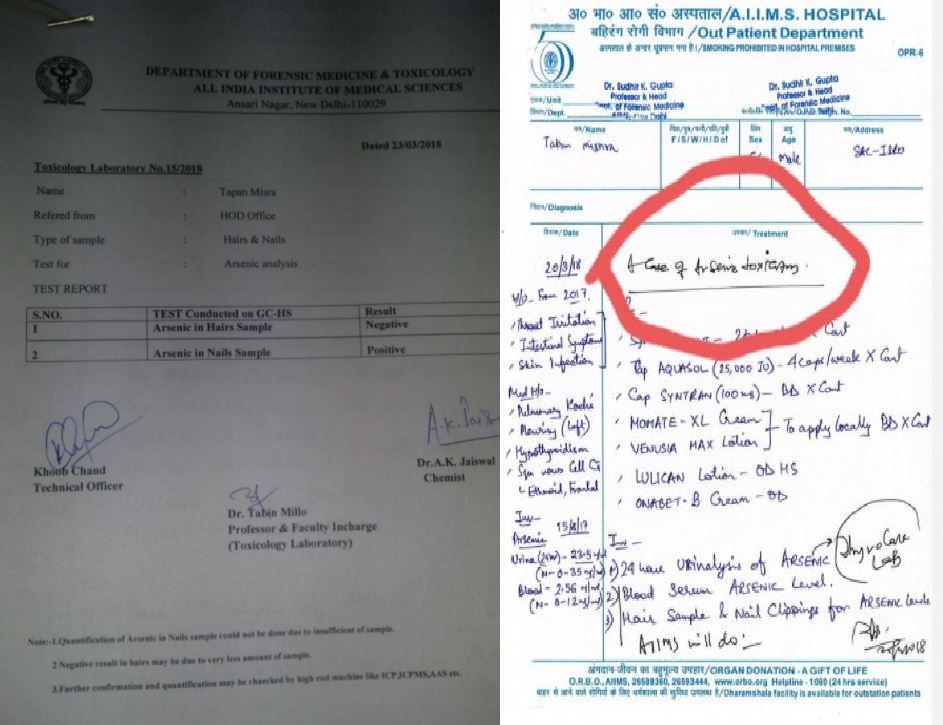 “The motive appears to be espionage attack…to remove a scientist with critical contribution of very large military and commercial significance, like expertise in building Synthetic Aperture Radar,” he alleged.

While Misra said that he wants the Government of India to investigate the incidents, there was no immediate response from ISRO regarding Misra’s claims.

We, in ISRO, occasionally heard about highly suspicious death of Prof. Vikram Sarabhai in 1971. Also…

We, in ISRO, occasionally heard about highly suspicious death of Prof. Vikram Sarabhai in 1971. Also heard occasional doubts about sudden death of Dr. S Srinivasan, Director of VSSC in 1999. Case of Shri Nambinarayanan in 1994 is well known. But I never thought that I will be at the receiving end of such mystery.

I was poisoned with deadly Arsenic Trioxide on 23rd May 2017, during promotion interview from Sci/Eng SF to SG in ISRO HQ at Bangalore. Fatal dose was probably mixed with chutney along with Dosai, in snacks after lunch. What followed was nightmare lasting for almost two years Severe loss of blood to the tune of 30-40% through anal bleeding. I barely could come back from Bangalore and was rushed to Zydus Cadila hospital in Ahmedabad. It was followed by severe breathing difficulty, unusual skin eruptions and skin shedding, loss of nails on feet and hands, terrible neurological issues due to hypoxia, skeletal pain, unusual sensations, one suspected heart attack and Arsenic depositions and fungal infections on every inch of skin and internal organs. Treatment was received in Zydus cadilla, TMH-Mumbai and AIIMS-Delhi over a period of two years. Famed forensic specialist, Dr. Sudhir Gupta told me that in his whole career, for the first time he was seeing a live specimen of a survivor of assassination attempt with fatal dose of assassination grade molecular As2O3. Otherwise his experience was limited to cadavers.

I am thankful to one of my Director colleagues, present at the same meeting, who warned me on 5th June 2017, of possibility of poison given to me. Probably, I guess, he witnessed poison mixing in my food. On 7th June, MHA security agency personnels met me and alerted me of Arsenic poisoning. I am thankful to them, as their info helped doctors to focus on exact remedy instead of scratching their heads with unusual signatures of my ailment. Security agencies took me to different cities. I am sure, without their intervention, I would have been dead with multiple organ failure within two to three weeks.

I learnt that this poison is given in molecular level suspension (crystal level is harmless) just after heavy meal. It is a colourless, odourless, tasteless suspension and hence cannot even be suspected. It gets absorbed through stomach during food ingestion, kills RBCs immediately to such large extent that the fine blood vessels are clogged, leading to heart attacks and strokes within two to three hours and the victim can easily be passed of as heart attack death.

Fortunately, that day, I did not take lunch. Arsenic passed directly to colon region and most of them got rejected through bleeding. The small remnant created so much damage to my health that I only know and I kept my morale high to face the danger with poise.
The motive appears to be espionage attack, embedded in the Government set up, to remove a scientist with critical contribution of very large military and commercial significance, like expertise in building Synthetic Aperture Radar. I will also not rule out it also as a new modus operandi of adjusting seniority and clear me who was perceived as obstacle. Whatever may be the reason, it was a great shame for the country and our security apparatus.

What pains me is that ISRO hierarchy and my colleagues tried to shun me as pariah. I pleaded with two successive Chairmen to help me in getting justice. Kirankumar tried his best to convince me that my earlier case of squamous cell carcinoma is resurrecting. I personally talked to Dr. Kasturirangan and Shri Madhavan Nair and they developed cold feet.

What followed was a series of nightmares, alongwith severe deterioration of health. I was bombarded with hundreds of threatening emails to keep my mouth shut. I was saved by whiskers, due to alacrity of security agencies, from massive explosive incident, in which Rs. 100 cr. lab was destroyed. This happened on 3rd May 2018.

On 19th July 2019, an Indian American professor of one of the topmost US university suddenly appeared in my office. He requested me not to utter a word in future. As a quid pro quo, my IITK grad son will be accommodated in a top notch college in USA. I declined and he left my office at 1430 hrs. And my thirty plus years contributing career was consigned to sinecure position at 1630 hrs. on the same day. I was removed from all responsibilities, including SAC Directorship.

My security was breached and I was poisoned with gaseous poison, probably Hydrogen Cyanide, which hypoxiates leaving no trace, on 12th July 2019. I was hypoxiated severely, leading to convulsion, loss of senses and memory. I survived because of NSG training of my PSO. I was transferred immediately to hospital, administered ozonised oxygen and had to spend couple of days in ICU. Hospitalization was followed by a long treatment for hypoxia, which is still continuing. Curiously it happened just two days prior to planned launch date of Chandrayan 2 on 15th July. Probably to prevent me to be present there on this occasion.

There was a plan to defame me by doctoring the CCTV recording of my room on 23rd and 24th Jan, 2020. It still baffles me how this high security recorder, located in the room of Director, SAC was accessed, contents were digitally edited and played back in analog for rerecording. CCTV recorders are special recorders which can only be fed in analog and can be digitally retrieved. The attempt was foiled because of alertness of security agencies. I still marvel at the cinematographical quality of editing of such an unimpressive fellow like me.
For last two years there were mysterious appearances of poisonous snakes like cobra, krait at a regular intervals of a few days in my quarter. Karbolic acid vents are put every 10 ft. Yet nobody could prevent intrusions of the snakes. Fortunately because of my four cats and my security staff, they could be killed or caught alive. Only three months back, we accidentally discovered a carefully laid secret tunnel in my compound and hidden in a trove of banana plantations. Once we blocked the tunnel, all snake intrusions stopped.

Two incidents convinced me that the mysterious people are after me and probably going to hit me hard before my superannuation at the end if this month. They want my mouth shut forever.

1. All the signatures point to deliberate poisoning of my mentally challenged son with Covid 19. The poor boy, who cannot even speak or eat or carry out hygiene activities himself, had to be hospitalized for 10 days, followed by months of complications.

2. There was a failed attempt in poisoning me with Arsenic, probably in first week of September 2020. It failed, but it was enough to create signature of quite good amount of poisoning, leading to skeletal pain, skin peeling and nail dying.

Enough is enough. I have faith in our security apparatus and men. But these mysterious men are much more equipped, trained, lethal and determined to snuff out living witness of the most shameful incident of Indian science. I put forward to Government, intellectuals and fellow scientists and my classmates and teachers, spread across the world, that all efforts should be made to keep me and my family safe and punish these mysterious men. I am convinced that these are the men, embedded in our system, are leading to mysterious deaths of scientists and destruction of our institutions. These incidents should be wake up call to prevent such nefarious happening to many of our bright minds in future. The nation, which cannot protect their own people who made contributions in building it in the first place, is destined to suffer.