In a notice to the four convicts, who are on death row, the jail administration informed them that they had a week's time, from when they receive the notice, to file the mercy petition, failing which it would be assumed that they are not interested in filing it.

New Delhi: In a significant development, the four convicts in the 2012 Nirbhaya gang rape and murder case moved a step closer to execution as they were issued a notice by the Tihar Jail Superintendent that they had exhausted all their legal options, except filing a mercy petition against their death sentence before the President of India. Also Read - 'Nirbhaya's Friend Took Money From Channels to Recount Horror Story'

Superintendent, Tihar Jail to the four Nirbhaya case convicts: It is informed that all legal remedies in your case have been exhausted, except the provision of filing 'Mercy Petition' against the Capital Sentence before the President of India. (1/3) Also Read - Delhi Court to Tihar Jail Superintendent: Submit Status Report on Execution Plea of Nirbhaya Gangrape Convicts

The notice added that the convicts had a week’s time, from when they receive the notice, to file the mercy petition, failing which it would be assumed that they are not interested in filing the same and the jail administration would proceed with necessary legal proceedings as per the law. 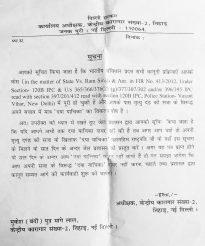 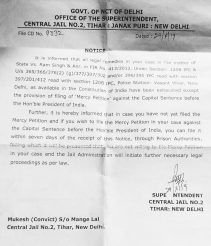 The juvenile convict in the case was released in December 2015 from a correction home after completing his ‘sentence’ under the erstwhile Juvenile Justice Act (JJA), while Ram Singh, the prime accused and brother of Mukesh Singh, committed suicide in 2013 while in jail.

‘Nirbhaya’ was a medical intern who was gang-raped by the six and tortured on a bus which she had boarded with a male friend on the night of December 16, 2012, after having watched a movie. She died in a hospital in Singapore, where she was airlifted by the government, on December 29.

The incident had triggered widespread outrage across the country. Public protests took place in various cities, with the one in Delhi, on December 21 at Rajpath, taking a violent turn.