Shakir Bashir Magrey, an Over-Ground Worker (OGW) of the Jaish-e-Mohammed, the Pakistan-based terror group which carried out the attack. He was sent to 15-day NIA custody by a special NIA court.

New Delhi: In a major success for the National Investigation Agency (NIA), which is probing the 2019 Pulwama suicide attack case, the anti-terror agency on Friday arrested Shakir Bashir Magrey, an Over-Ground Worker (OGW) of the Jaish-e-Mohammed (JeM), the Pakistan-based terror group which carried out the attack on February 14, 2019. Also Read - Pulwama Attack Anniversary: Who Benefitted The Most? Rahul Gandhi Trains Gun on BJP Government 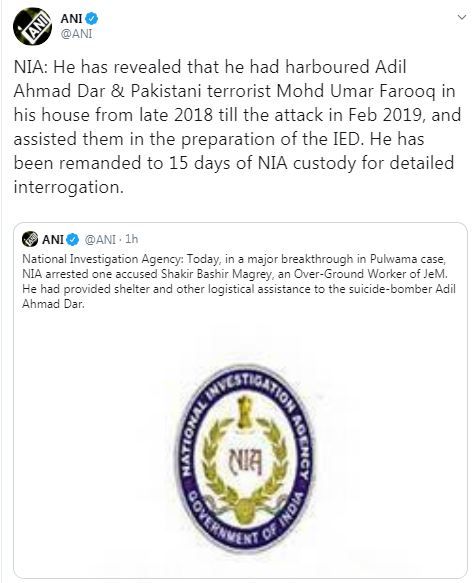 In a statement, the NIA further said that besides Adil, Shakir also harboured Mohammed Umar Farooq, a Pakistani terrorist and assisted them in preparing an Improvised Explosive Device (IED).

During his interrogation, he disclosed that he collected and delivered arms, ammunition, cash and explosive material to the JeM terrorists including those involved in the Pulwama attack, on several occasions. A resident of Hajibal village in Kakapora in Jammu and Kashmir’s Pulwama, he owns and runs a furniture shop.

He was produced in a special NIA court in Jammu and Kashmir and was sent to 15-day NIA custody.

Last month, in an encounter in Pulwama, the security forces had gunned down three Jaish terrorists on the Srinagar-Jammu Highway and arrested the driver of the truck, who later turned out to be a cousin of the Pulwama bomber.