Uttar Pradesh Chief Minister Yogi Adityanath has expressed grief over the incident. He has reportedly directed DM SSP to provide all possible help to the injured.

New Delhi: 29 people were killed and several injured on Monday after a Delhi-bound bus hit the railing and fell into ‘jharna nalla’ on Yamuna Expressway. The double-decker bus which belonged to Awadh depot was heading to New Delhi from Lucknow. Also Read - No Delhi-Agra Travel Via Yamuna Expressway if You Don’t Have THIS App | Check Details

According to the reports, the driver of the bus fell asleep and lost control of the vehicle, following which the mishap took place. Nearly 50 people were on board when the incident happened. Also Read - Greater Noida: 12 Injured After 6 Vehicles Collide With Each Other at Yamuna Expressway

“CM orders enquiry by a committee consisting of Transport Commissioner, Divisional Commisioner & IG Agra to investigate the incident in 24 hours and give report on the cause of incident and also report on long term recommendations to avoid such accidents,” Agra DM NG Ravi Kumar said.

Meanwhile, UP roadways has announced an ex-gratia amount of Rs 5 lakh for the kin of the deceased. The identities of the deceased are yet to be identified. 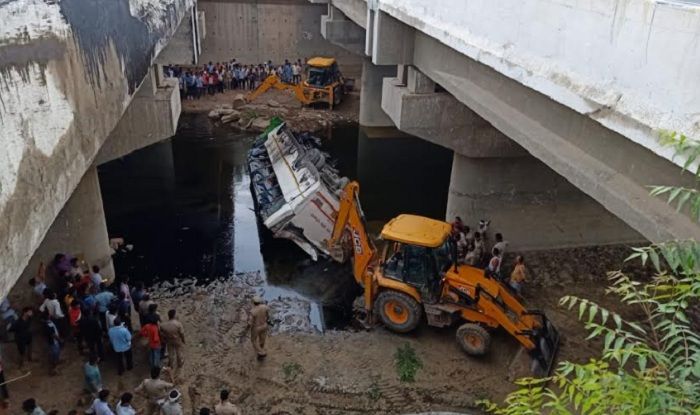 “One Sleeper Coach passenger bus travelling from Lucknow to Delhi met with an accident on Yamuna Expressway. It fell into the side fall about 15 feet deep. 20 passengers rescued so far. Efforts are on for the rest,” A Satish Ganesh, IG Agra said in a tweet.

One Sleeper Coach passenger bus travelling from Lucknow to Delhi met with an accident on Yamuna Expressway. It fell into the side fall about 15 feet deep.

20 passengers rescued so far. Efforts are on for the rest.

“Pained by the bus accident in Agra, Uttar Pradesh. Condolences to the families who have lost their loved ones. I pray that those injured recover fast. The state government and local administration are providing all possible assistance to the affected,” tweeted PM Narendra Modi.