37 Central Acts, Including GST, IPC, CrPC, to Now be Valid in Jammu And Kashmir: Government

New Delhi: In a major development, the Centre has announced that a total of 37 Central Acts, which, before abrogation of Article 370 were applicable in the rest of India but not in the erstwhile state of Jammu and Kashmir, will now be applicable in the newly created union territory of Jammu and Kashmir. Also Read - Anguished Iltija Mufti Says J-K Grappling With Crisis After Article 370 Was Revoked 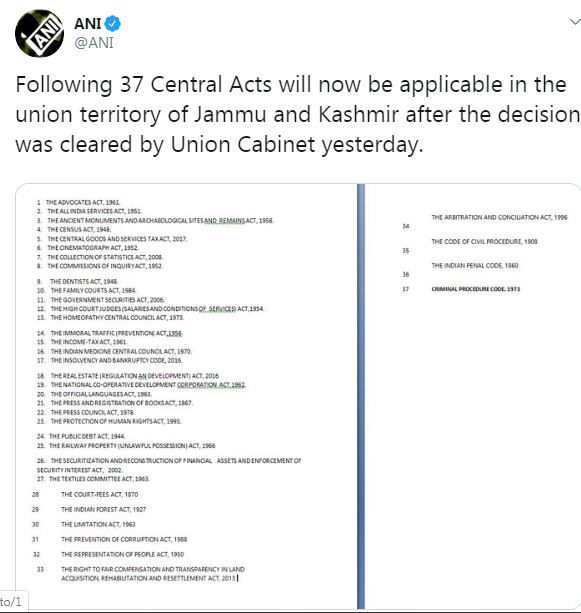 Also Read - Despite All 'Pressure', we Stand by Our Decision on Article 370, Citizenship Amendment Act: PM Modi in Varanasi

Among those Central Acts which will now be applicable in the union territory of Jammu and Kashmir are the Goods and Services Tax (GST), 2017; the Income Tax Act, 1961; the Real Estate Act, 2016; the Indian Penal Code (IPC), 1860 and the Criminal Procedure Code (CrPC), 1973.

Also, post abrogation of Article 370, announced on August 5 last year by Union Home Minister Amit Shah, its citizens no longer hold dual nationality of J&K and India; the only citizenship that they hold now is that of India. Additionally, non-locals are now eligible to buy property there.