From his comedic roles on television to his iconic stand-up routines, Aziz Ansari has never shied away from talking about what it's like to navigate the world as an Indian-American.

From his comedic roles on television to his iconic stand-up routines, Aziz Ansari has never shied away from talking about what it’s like to navigate the world as an Indian-American. Here are 5 times he absolutely nailed the immigrant experience, in ways we can all relate to.Also Read - Third Wave of Corona May Hit India This Month, Likely to Peak in October: Experts Who Predicted Second Wave

1. When he revealed Tom Haverford’s name change on “Parks and Recreation”

From constant mispronunciations to the agony of never finding your name on a Coke can, many South Asian-Americans live through the challenges of growing up with a traditional name. In season two of this superhit NBC comedy, Ansari’s character touched on that experience when he revealed that he had changed his name from Darwish Sabir Ismael Gani to Tom Haverford, “because brown guys with funny sounding Muslim names don’t make it far in politics.” It’s a practice all too common among prominent Indian-American politicians, like former Louisiana Governor, Bobby Jindal, and South Carolina Governor, Nikki Haley. Ansari’s character gets real about admitting his insecurities and his way of coping. Also Read - Tokyo Olympics 2020: Twitter Sends Wishes to PV Sindhu as She Faces World No.1 T.Y Tai in Semifinals

2. When his character Dev captured the struggles of interracial dating on “Master of None”

Ansari’s hit Netflix series hilariously captures the challenges of dating outside your race as a first-generation American. His character, Dev, works to balance living with his long-term girlfriend, Rachel, and respecting his parents’ traditional Indian beliefs. Rachel was shocked to learn that Dev hadn’t broken the news of their relationship to his parents after an entire year of dating, prompting Dev to make the inevitable awkward introduction.

[Read Related: “5 Things We Want to See in Season 2 of Aziz Ansari’s ‘Master of None’“]

3. When he ate his way across India and told us all about it 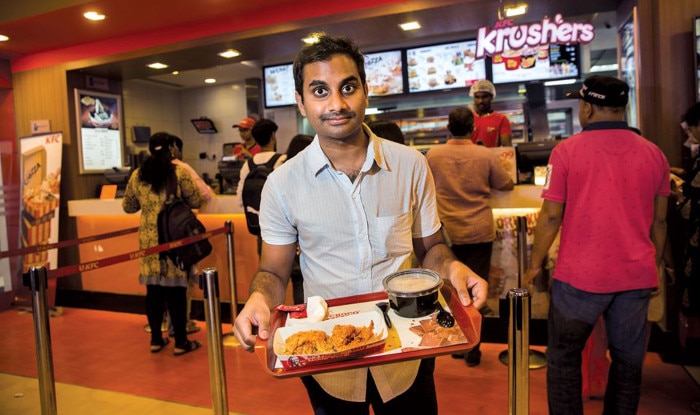 [At the KFC in Trivandrum, Ansari opts for a rice bowl topped with popcorn chicken, what he calls a “peculiar hybrid of two vastly different cultures.” | Photo Source: New York Times/Kenneth O’ Halloran]

From fried prawns to popcorn chicken basmati bowls, Ansari walks us through his culinary adventures in Trivandrum, India. His personal essay, published in New York Times Magazine earlier this month, captures the common annoyances of traveling to the motherland – heat, mosquitoes and a lack of first-world comforts. But he also describes the incomparable feeling that comes from connecting with your roots.

4. When he brought his parents on stage to close out his show at Madison Square Garden

Ansari sold out the coveted venue last year for his fourth stand-up special, “Aziz Ansari: Live at Madison Square Garden.” He delivered the laughs all night, and to no surprise, the audience called Ansari on stage for an encore—but rather than basking in the spotlight himself, he invited his parents to join him. It was a true show of humility that captured the special place parents hold in South Asian culture.

5. When he took Rupert Murdoch to task for Islamophobic comments

Last year, media mogul Rupert Murdoch took to Twitter to express his view that all Muslims must be held responsible for “their growing jihadist cancer.” Ansari took note and responded with his signature quick wit, asking Murdoch how his 60-year-old parents in North Carolina could help destroy terrorist groups. The conversation was quickly picked up by his millions of followers, who joined in on tweeting the #RupertsFault hashtag.

.@rupertmurdoch Rups can we get a step by step guide? How can my 60 year old parents in NC help destroy terrorist groups? Plz advise.

.@rupertmudoch Are you responsible for the evil shit all Christians do or just the insane amount of evil you yourself contribute to?

.@RUPERTMURDOCH PLEASE TELL ME WHAT HAVE YOU DONE TO STOP ANY AND ALL CRIMES COMMITTED BY PEOPLE OF YOUR RELIGION???!!!

To be clear, I am not religious and have nothing against Christians or Muslims, just ignorance like what @rupertmurdoch is spreading.

They blamed Murdoch for everything from the Westboro Baptist Church to Christian rock music, illustrating how ridiculous it was to place blame on an entire religion for the actions of extremist fringe groups. Ansari also expressed that he is not religious, but wanted to combat ignorance and misinformation, capturing the multiplicity of beliefs held by the 1.6 billion Muslims across the world.