They are smart, successful and savvy South Asian women who have conquered the professional world—but their journey is riddled with cultural hurdles. They are confident and outspoken in the work they do, but they are also victims of silence, imposed by societal norms and patriarchal traditions Also Read - Pani Puri Seller Celebrates Daughter's Birth, Offers Free Snacks Worth Rs 40,000

But on June 23rd. under the stage lights of Peoples Improv Theater, they chose to break their silence and share their personal stories, some of them for the first time, to a room full of complete strangers—110 to be precise. Also Read - Usman Khawaja Opens up About Racism in Australian Cricket in His Early Days: Was Told am Not The Right Skin Colour

One by one seven women, clad in black, walked out onto the stage, they joined hands and in one voice quoted the lines from Sue Monk Kidd’s book “The Secret Life of Bees:” “Stories have to be told, or they die, and when they die, we can’t remember who we are or why we’re here.”

These women may not fit the bill as your masterful storytellers, but that night, they effortlessly conveyed a wide range of emotions leaving the audience captivated. They shared their personal anecdotes of pain, of silence, of shame they have been suffering for years.

Their stories were brought to light and curated by trained stage producers and directors as part of a project called The Devi Story Lab, a 10-week intensive storytelling workshop.

Television anchor and Lady Drinks co-founder Joya Dass also shared her story of coming from a home of domestic violence. She first learned about the power of storytelling while training for her TedTalk on “Re-thinking Failure” back in November 2013. It had such a powerful impact on her that she wished for the same experience for other South Asian professional women.

“I saw the cultural struggles many women had to overcome to get to their goals,” Dass said. “I think we are lying to ourselves if our cultural hurdles don’t get in the way of our professional goals at times. I saw the purchase in hosting a storytelling workshop as a means of sharing a lot of the pain and the struggle that is often kept within.” 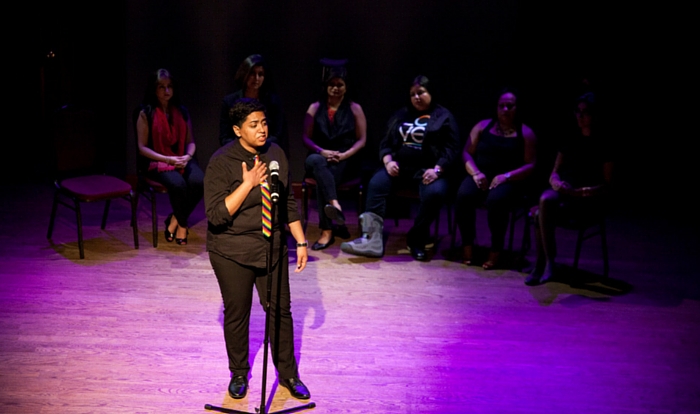 [One of the participants of the Devi Story Lab, Priya Arora | Photo Credit: Jen Painter]

These storytellers under the tutelage of Nadia Manzoor (the creator of the popular one-woman show, “Burq Off!” and web series “Shugs and Fats”), tackled a range of issues including divorce, physical and emotional abuse, racial, sexual and gender discrimination.

While Paulus spoke about giving away her life’s control to God, Agarwal shared how she gained control of her life after an abusive childhood and two toxic marriages.

“When I first considered signing up for the storytelling workshop, I was skeptical,” Agarwal said. “I was nervous about being on stage and publicly sharing the private details of my life. I asked my teenage daughter, what she thought. Her unequivocal response was ‘Mom YES! You should do it.'”

In the process of discovering their own stories, they also learned a lot about other participants, their struggles, and their determination.

“Through this workshop, I learned about Priya and Divya’s story,” Paulus said. “They bravely talked about the struggles of being gay in a South Asian culture and it’s helped me to open up a dialogue in my own household. A conversation my husband and I probably would have never had before.”

Both Arora and Sood shared their struggles of holding multiple minority identities as defined by their sexuality, their ethnicity, and their gender.

“People have in the past told that you are already brown, you are already Indian, ‘you are a woman and on top of that, you want to be gay,’ as if it’s a choice that I made,” Sood said. “They don’t understand that’s how I live because that’s who I am.”

They talked about their continuing fight for acceptance in their families and their community, shared stories of fear and shame that forced them to lead a dual life and how that pushed Sood to even attempt suicide.

“When you realize who you are, and it’s different from what you have been raised to be, and the norm that you know, it is the most frightening precipice to stand upon, and that’s why my story deals with mental illness, depression, and suicide,” Sood added.

“I am trying every day to make my father realize that who he raised and who I am don’t have to be at odds,” Arora said.

Afzal, who shared her story for the first time, of growing up in a Muslim household and living with her abusive mother, said how important it is for South Asian women to find their own voice.

“Make your voice heard,” Afzal said. “There is this whole intersectional movement of people speaking out, all minorities, blacks, women, Trans, gay, everyone is coming forward for their own rights. And we as a diaspora, we deserve to come forward with our own voices too. It’s all like one movement.” 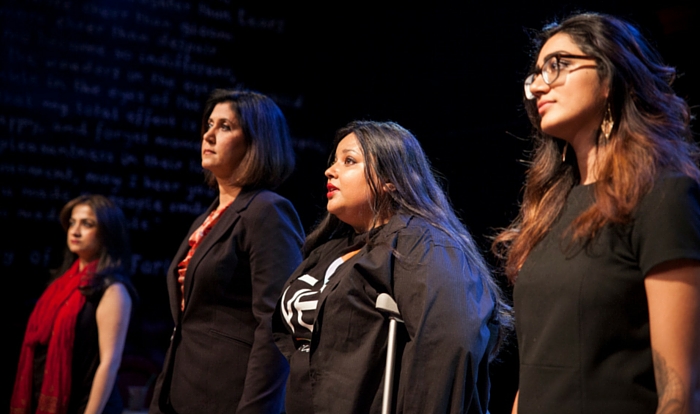 These women chose to speak their truth, not only to find their own voice but also to help other women untangle their Gordian knot, to let them know that they are not alone.

Although only seven women told their stories on stage, this exercise helped build an army of women who came forward to share their stories.

“The goal here was to start a movement and blow the lid off a culture that elects not to talk about the tough stuff,” Dass said.

She said she hopes this project continues to inspire more South Asian women to come out and share their stories.

“Please share your stories. Don’t be afraid to be vulnerable. Don’t be afraid to show the ugly stuff too,” urged Dass. “You might be surprised how much closer it makes you to people. Otherwise, we are stuffing pain inside that comes out in other insipid ways.”