Due to this 'inequality' in wages most of the government officials are unhappy with the decision and had threatened for an indefinite strike several times.

New Delhi, January 28: Almost 68-years after Independence, the Indian government has announced seven central pay commission on a regular interval. In this 68 years, since India got its Independence from British Raj there has been an impressive hike in the salaries of senior staffers working under the payroll of Central Government. But it is quite noteworthy that the minimum wage – under which 83 per cent of the government fall – has not seen ay big changes. The salaries of junior most Central Government officials’ has increased from Rs 55 (under the 1st Pay Commission) to Rs 18,000 (under the 7CPC). On the other side the senior most government staffers salaries have been hiked from Rs 2000 (under 1CPC) to Rs 2.5 lakh (under 7CPC). Due to this ‘inequality’ in wages most of the government officials are unhappy with the decision and had threatened for an indefinite strike several times. Under the 7CPC the high-powered committee had recommended a 14.27 per cent increase in the basic pay of central government employees. (ALSO READ: 7th Pay Commission: Govt may make key announcement on higher allowances in Budget Session)Also Read - 7th Pay Commission: Good News For Govt Employees. They Are Likely to Receive Another 3% DA Hike in January 2022

Under the 7th Pay Commission slab – which was implemented almost eight years after the previous pay commission the salaries of the government employees saw a significant rise. The basic pay under the 7CPC the lowest salary was increased to Rs 18,000 from Rs 7,0000 while the salary of the senior government officials has gone up to Rs 2.50 lakh from Rs 90,000. But due to rising inflation and price rise, the junior staffers had already demanded for a hike of more than three times which is: Rs 25,000 per month.

Experts believe that in last 68 years, the government has increased the minimum wage of its central government employees by 32,727 per cent (from Rs 55 to Rs 18,000). While the salary of senior staffers has seen a drastic increase of 12,500 per cent, from Rs 2,000 per month to Rs 2.50 lakh per month. But experts believe that the disparity in the minimum wage has been a problem since British Raj, where junior staffers were paid less.

Meanwhile, some reports suggest that the employees who have been eagerly waiting for higher allowances under the 7CPC will have to bear three more months of delay to get their pay scale updated. Due to early Budget which is followed by Assembly Elections in five states, due to which model code of conduct has been imposed, the government is likely to delay the payment of the higher allowances. The polling in five states – Uttar Pradesh, Punjab, Uttarakhand, Goa and Manipur – will begin on February 4 and the results will be declared on March 11. 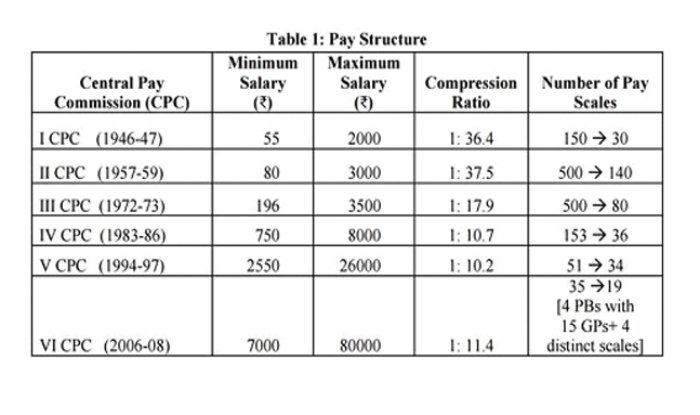