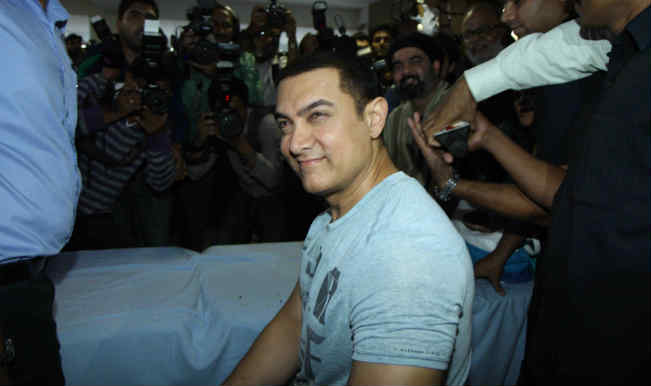 Mumbai, May 29: Maharashtra Chief Minister Devendra Fadnavis today said association of Bollywood actor Aamir Khan with both ‘Swatchh Maharashtra’ and ‘water conservation’ campaigns will help in effective communication of these initiatives. “Aamir is a brand communicator for cleanliness and drought -free state campaigns. Why should opposition object… he is a popular actor with social awareness and a good communicator who will ensure the message reaches the last person. The opposition should not adopt negative attitude. Sant Gadge baba remains an icon of the state,” Fadnavis told reporters after a workshop to launch cleanliness drive of Konkan division with Khan here.Also Read - Centre Writes To States, Seeks Report On Number of Deaths Due to Oxygen Shortage During 2nd Wave

Earlier in the day, opposition NCP took a swipe at the BJP-led government for bringing in Bollywood superstar as the face of ‘Swatchh Maharashtra’ campaign and removing the name of Sant Gadge Baba from the initiative. The actor recently spent six hours with officials to understand the drought situation and what the government intended to do through ‘Jalyukt Shivar’ (farm-level water conservation) scheme, Fadnavis stated. (Also read: Aamir Khan: Ranbir Kapoor is a fantastic actor) Also Read - Netizens Ask Aamir Khan’s Daughter Ira Khan ‘Which Cigarette Do U Smoke?’ on Her Latest Photo

He has now agreed to associate himself with the scheme because he believes he can serve the society by promoting awareness about making the state drought-free and garbage-free, the Chief Minister added. The actor would travel to the villages selected by the government for ‘Jalyukt Shivar’ scheme, he said. Also Read - Video of Crocodile Crawling Around the Streets of Maharashtra's Sangli Goes Viral | WATCH

A ‘Swachh Maharashtra’ fund would be set up, Fadnavis said, adding that allocation of 14th Finance Commission funds and inclusion of cities in smart cities plan would depend on participation of civic bodies in the Swachh Maharashtra campaign.

Speaking on the occasion, Khan said passion was necessary to make the Swachh Maharashtra drive a success. “Passion is a necessary ingredient. The objective can be achieved through political will, administrative will and participation of general public. “People are now ready to change and actively contribute in the process. We must not lose the opportunity to make Maharashtra waste-free, a model state in the entire country…My job is to create awareness about it,” Khan said.