AAP vs Yogendra Yadav and Prashant Bhushan: Why is Arvind Kejriwal silent?

While the war of words is defying the party, Arvind Kejriwal decided not to speak against it. 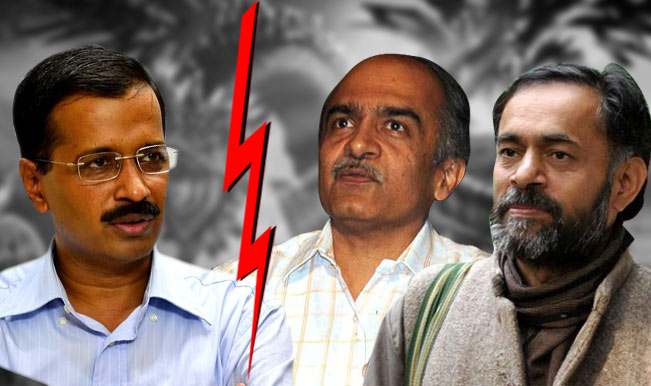 Also Read - Punjab CM Had Several Chances to Stop Farm Bill But He Didn't Do So: Delhi CM Kejriwal

When everyone was expecting that the Arvind Kejriwal-led Aam Aadmi Party (AAP) is going to begin a new chapter in Indian politics after its landslide victory in Delhi Assembly Elections 2015, bad news hit party sympathisers. The founder member of AAP, Prashant Bhushan and the party’s internal lokpal Admiral (Retd.) Laxminarayan Ramdas raised their voices over the party’s leadership and lack of democracy. Also Read - RT-PCR Testing Cost to be Reduced in Delhi, CM Kejriwal Issues Fresh Directives

Slamming AAP for becoming a one-man centric party, Prashant Bhushan said, “One-person centric campaign, which was run during Delhi elections, is making our party look more and more like other conventional parties that are also one-person centric. The only difference being that we still claim that we are wedded to the principles of ‘swaraj’ while they don’t.” (Read: Hailing AAP’s democracy, Yogendra Yadav defends Admiral Ramdas’s criticism)

Criticising AAP’s leadership and internal functioning, Admiral Ramdas wrote, “Can the chief minister of a state and the national convener if he/she be the same person be in a position to discharge both the duties efficiently? There has been criticism within the party regarding the decision-making and inner party democracy.”

Refuting the claims of fight for posts within AAP, Yogendra Yadav said that such reports are baseless. But the letter written by the Delhi AAP State Secretary Dilip Pandey tells a different story. Pandey issued a complaint against Shanti Bhushan, Prashant Bhushan and Yogendra Yadav for involving in anti-party activities.

All these recent development show that all is not well within AAP. While the war of words is defying the party, Kejriwal decided not to speak against it. While leaders like Yadav and Ashutosh expressed their stand over the crisis through social media, the Delhi CM remained silent on the issue.

Giving a mandate in favour of AAP in the Delhi Assembly Elections 2015, the people of Delhi have handed over a big responsibility to Kejriwal. If he fails to unite his own party, his dream to take AAP on a national level might remain only a dream.