On Sunday, Mishra was caught on camera asking the Delhi Police to remove the anti-CAA protesters from Jaffarabad in three days or 'we won't listen to you if roads are not vacated by then.'

Speaking to news agency ANI, Mishra said, “I appeal to everyone to stop the violence as it will not lead to any solution. Whether it is people who are supporting CAA or those who are against it, I appeal everyone to maintain peace. Delhi’s brotherhood should remain intact.” 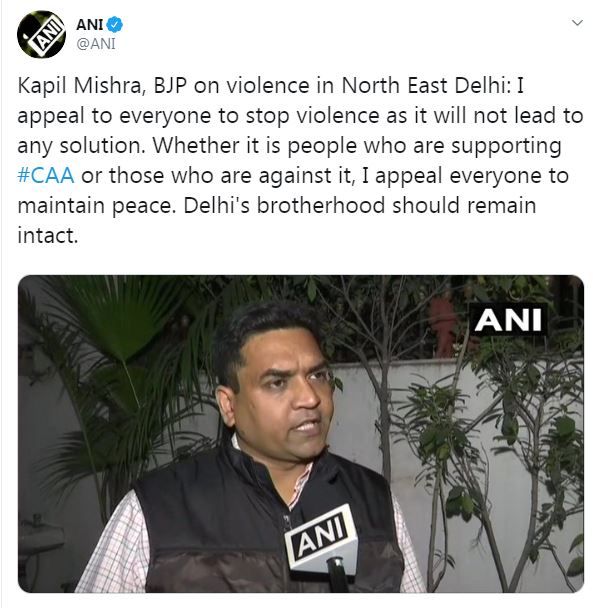 On Sunday, Mishra had led a pro-CAA crowd to Jaffrabad where a group of women, on Saturday night, had occupied a key road to protest against the controversial legislation. While the protest is still going on, Mishra was caught on camera giving an ‘ultimatum’ to the police to remove the protesters in three days or ‘we won’t listen to you if roads are not vacated by then.’

Notably, the ‘three-day’ remark was in reference to the ongoing two-day maiden state visit of US President Donald Trump to India. He arrived in Delhi in the evening after visiting Ahmedabad and Agra, respectively, earlier in the day. He will end his visit tomorrow.

Mishra’s departure from the protest site was followed by a clash between the two sides, prompting many on social media asking the Delhi Police to arrest him for inciting violence in the area.